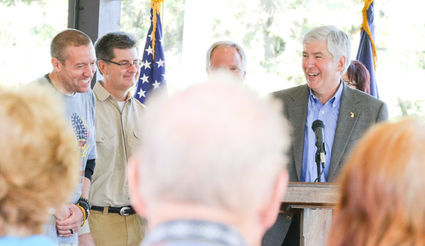 Michigan Gov. Rick Snyder, at microphone, speaks to a crowd during a ceremony at Depot Park in downtown Ironwood Monday. The park serves as a trailhead for a 600-mile trail from Ironwood to Belle Isle in Detroit. At left is Chris Hillier of Taylor. He was the first to walk the length of the trail.

IRONWOOD — Michigan Gov. Rick Snyder helped dedicate Depot Park in Ironwood, Monday as part of his plan to create a 600-mile biking-hiking trail from Belle Isle in Detroit to Ironwood.

Snyder and local leaders spoke about the project, and how the park has become a trailhead for the statewide trail system.

“It is great to be here and I couldn’t think of a better place to start than right here in Ironwood,” Snyder said.

Before Snyder spoke, Mayor Kim Corcoran spoke about the history of Ironwood and the park project. In the early 1890s, business was booming in the city and a railroad station was built to help the economy.

In the 1970s, however, the economy slowed, and the downtown depot was boarded up and not used.

“Fast forward to today, and here we are, revitalizing Depot (park),” Corcoran said. “Thank you to the Ironwood Historical Society for revitalizing the Depot and the Downtown Ironwood Development Authority for getting this project rolling.”

Funding for the project was secured by three grants and city funding, totaling $450,000.

“Whether you’re a tire and tracks type of person with ATVs and snowmobiles, or a tires and tenner shoes kind of person with bikes and walking or running, there is something for everyone,” Corcoran said.

“In 2009, DIDA set project goals and I had no idea what an amazing project it would become,” Garske said.

She thanked the DIDA board and volunteers for their work in putting the project together.

“As someone who grew up here, and had both my grandfathers work in the mines, I am so proud that this honors our area and our heritage, but also serves as Michigan’s western gateway,” Garske said. “Let’s be Michigan’s best first impression.”

Snyder said the trail has inspired other communities across the state.

“We have communities all across the state that want to be part of this trail,” Snyder said. “It’s becoming larger than we first thought.”

A bonus for Snyder was not only attending the dedication, but learning more about the heritage of Ironwood and surrounding area through the museum inside the Depot.

“We should be proud of the history. If you look at it, there is a heritage of mining, the wonderful museum that you have in the train depot right here, and it represents Ironwood well. I enjoyed having a chance to look around, as part of the trail opening. It’s a good combination, culture and recreation in one spot.”

According to Snyder, the trail fits well with the Pure Michigan campaign.

“We’ve all heard that before, and what does that mean?” Snyder said. “For me, it means a quality of life, a special place with special people. People make a great experience, and that is what you have created here. This gateway is something to be proud of.”

“This was about doing something good, doing something together and doing something right,” Snyder said. “It was a great partnership. I want to thank the city of Ironwood, and all the surrounding communities that came together and worked as a group on this. It’s great to see the support from across the U.P. We have many people interested in participating in this whole trail process.”

Chris Hillier, of Taylor, the first person to hike the proposed trail route, completed his journey during Festival Ironwood at the end of July. He’s also on Snyder’s U.P. visit.

Asked about whether or not he would hike the trail, Snyder said, “Six hundred miles is a good trip,” Snyder said. “That will have to wait until I’m done being governor. That way I’ll have enough time to keep walking.”

Snyder’s day continued at the offices for Orvana Minerals Corp. Copperwood mining project in Ironwood and a trip to the mine site in Ironwood Township north of Wakefield.

“We were very pleased to have him visit and have him tour the facility here and tour the site,” said Dave Anderson, director of health, safety, environment and public relations. “We’ve enjoyed excellent support from the governor and the administration and we expect to see that continue.”

Anderson said it was good to hear the governor’s commitment to creating more jobs in the area.

“He was seeing if there’s something more that he can do. He wants to see more jobs in the Western U.P.,” Anderson said.

“It was a good opportunity for the governor and his administrative heads to meet with our chairman of the board, Bob Mitchell,” Anderson said. “It gave us a chance to say thank you for the continued support. We hope to get this up and going soon.”

Snyder’s trip through the U.P. continued Monday with a stop at Victoria Dam in Ontonagon County to see the work being done on the dam.

From there, he continued to Houghton to mark the 10th anniversary of the MTEC SmartZone, a center for business incubation, and meet with community leaders at Finlandia University.

Today, Snyder will speak at dedication ceremonies in Copper Harbor for Brockway Mountain Drive and Negaunee for a trail head, before heading to the U.P. State Fair in Escanaba later in the week.