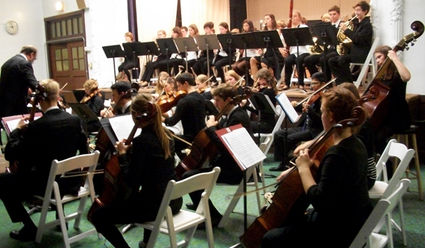 Conductor Reinhard Volz (far left) leads the Youth Symphony Orchestra of Lucie-Kolsch-Jugendmusikschule of Worms, Germany, at the old Roosevelt School auditorium in Marenisco on Saturday. They performed for a full house.

MARENISCO — Two traditional German orchestras wowed the crowd with their performances at the old Roosevelt School in Marenisco on Saturday evening.

The audience gave the traveling musicians a warm welcome with a standing ovation after their first selection of the night.

The performance was sponsored by the Marenisco Township and Blue Lake Fine Arts Camp based in Twin Lakes, Wis.

The Youth Symphony Orchestra of Lucie-Kolsch-Jugendmusikschule and the Sinfonic Winds Concert Band of Musikschule des Landkreises Alzey, both of Worms, Germany, held a joint concert in the auditorium in the old school. The venue was provided by the building’s owner and director of the Institute for Small Town Studies, Rob Dorgan.

The performance featured the music of composers such as Otto M. Schwartz, Edvard Grieg, Helmut Eisel and Camille Saint-Saens.

Sinfonic Winds performed more classical pieces, while the Youth Symphony Orchestra played music written by modern composers, including a piece from the film “The Lord of the Rings.”

The members from both orchestras are classically trained and have participated in a variety of competitions, including the European Youth Music Festival in Munich and the Nibelungen Festival in Worms.

While in Marenisco for the weekend, the 86 musicians were housed by local families.

Sally Hagen and her husband brought home nine members. She said they were “great kids” and they reported having a good time during their visit to the Upper Peninsula.

Bruce Mahler, one of the organizers of the event, thanked “the kind host families” that housed the German youthes. “Without the host families, we couldn’t do this concert,” he said.

This was their only concert date in the UP. Next, they will play for the German consulate in Washington D.C. on Oct 17.