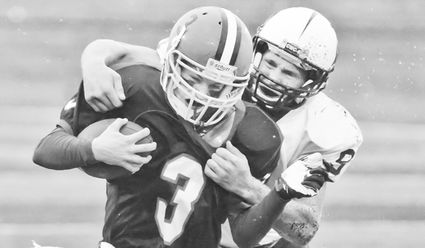 SCHOFIELD, Wis. - Hurley wrapped up another playoff run to remember. It would just like to forget the final 4 minutes, 43 seconds of the second quarter Saturday.

Shiocton scored 22 points in that stretch to take control and the Chiefs went on to beat the Midgets 50-0 in Saturday's WIAA Division 6 state semifinal at DC Everest.

Seemingly every cop car and fire truck in Iron County escorted the Midgets into and out of town Saturday. A huge Hurley crowd packed the stands despite the miserable wet weather and what turned out to be a gloomy ending to its second trip to the semifinal since 2009.

"I'm really proud of what my team did this year," Hurley coach Scott Erickson said. "They got to the edge, right to the edge of the state finals. Two times out of the last five years, I think that speaks volumes where your program is at."

The Chiefs' Jacob Van Asten accounted for 371 of Shiocton's 450 yards, including 28 carries for 308 rushing yards. Shiocton tallied its 10th shutout of the season while holding Hurley to just 50 rushing yards on 25 carries and two first downs.

"To shut down a team that ran for 4,000 yards, that was outstanding," Shiocton coach Dino Heinemeyer said. "They're used to running the ball. I don't know what it is, but these guys are an outstanding defensive team. The guys came off the ball pretty nice, the linemen, and we figured out a few things they were doing and Jake had a nice day, no doubt about it."

The Midgets trailed 8-0 in the second quarter when they picked up their first first down when Shiocton took the bait on fourth and three, going offsides.

But Hurley punted three plays later and Shiocton capped a six play, 60 yard drive with a 14-yard touchdown run by Talon Heinemeyer with 4:43 left in the first half. The two-point conversion failed and Hurley trailed 14-0.

That would have been a good time for halftime. Nothing went Hurley's way before intermission.

The Midgets went three-and-out on the ensuing possession and Zach Ofstad buried the Chiefs at their own 3 with a 66-yard punt, finally putting them deep in their own territory.

But on the first play, Van Asten may have run himself and his team to Madison with a 97-yard touchdown run. The two-point conversion made it 22-0 Shiocton.

"We didn't field the punt," Heinemeyer said. "I don't know why we didn't field it; he let it bounce. That could have been a big turning point because you sure don't want to punt in our end zone or get a turnover in this kind of weather. That was huge, unbelievable. That's just a senior kid making plays."

"Ahh, geez, that hurts, that hurts," Erickson said. "Off tackle, should have been able to make a stop there. And then we gave up another one before halftime on the long pass. Those hurt. They really take the air out of your sails. When you have bad weather and things go bad, they go from bad to worse real fast."

The Chiefs put the dagger in a little deeper before halftime.

Hurley's Mark Saari rushed for 15 yards, the Midgets' biggest play of the day. The drive stalled, though, and the Midgets went for it on fourth and one at their own 48. They were stuffed for no gain.

Shiocton marched downfield in less than a minute and Van Asten scored the second of his three touchdowns with a two-yard run with half a second remaining in the half.

The Chiefs struck right out of the gates in the second half, with Van Asten rushing 56 yards on the second play of the half for a touchdown. They led 38-0 and the running clock started.

Hurley had seven plays in the second half, two three and outs and one Saari rush in the fourth quarter, the only Midget offensive play in the quarter.

Seemingly happy with 50 points, Shiocton kneeled down for the two-point conversion. Van Asten and Heinemeyer played most of the drive despite having the game in hand and a state final to play in five days.

Saari led Hurley with 42 yards on 11 carries. The Midgets' offense just couldn't ever get going.

"They were more physical, a little more physical than we were today, that's for sure," Erickson said. "We didn't get a lot of stuff that we wanted to get going. Every time we got something good on offense, we followed up with a penalty or dropped a pass. Just couldn't sustain enough to keep our defense off the field today. Our defense played well at spots and then had a breakdown and No. 3 (Van Asten) made us pay or No. 9 (Heinemeyer) made us pay or 22 (receiver Patrick Brouillard)."

The Midgets finished at 11-2 and there isn't any shame in a year that finishes on the Field Turf of state semifinals.

"Especially when nobody thought you were going to make it here, period," Erickson said. "Just proud of the way they rallied after the Forest Park (loss, week four) and ran off a ton of things and played well through the playoffs. Just didn't have their best game today."