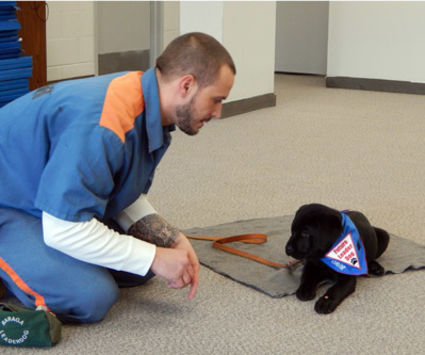 Baraga Correctional Facility inmate dog trainer Richard Hetherington works with future guide dog Bear in Baraga Jan. 28. Inmates at the prison took charge of a pair of puppies recently, and have begun training them for lives as guide dogs for the blind. Prison officials say it's a win-win formula for everyone, with carefully chosen inmates able to volunteer the huge amount of time needed to train the dogs properly, and the dogs giving the prisoners a sense of accomplishment, responsibility and empathy.

BARAGA (AP) - Inmates at the Baraga Correctional Facility took charge of a pair of puppies recently, and have begun training them for lives on the outside as guide dogs for the blind.

Prison officials say it's a win-win formula for everyone, with carefully chosen inmates able to volunteer the huge amount of time needed to train the dogs properly, and the dogs giving the prisoners a sense of accomplishment, responsibility and empathy.

"These guys took something from the world. Now their time has meaning and they're giving something back," Michigan Department of Corrections regional assistant director Michael Curley told The Daily Mining Gazette of Houghton. At the same time, the dogs seem to improve inmate moods.

The dogs come from a Detroit-area charity called Leader Dogs for the Blind, which provides dogs, inmate and staff training, and support for the program. It takes the dogs back after a year, then provides advanced training and testing, and eventual free placement with a handicapped person - for those dogs that show they're up to the task.

Resident Unit Manager Steve Niemi oversees the Level I low-risk prisoner unit where the training takes place and is in charge of the Leader Dog program. He said Leader Dogs has been using both prisons and private homes for puppy placement and training for years, and that prison-based programs are growing primary because they're successful.

Inmate trainer Brandon Carbendo, who has been working with Axel for about a month, said that's likely because he's able to spend more time with Axel than leader dog trainers on the outside, with numerous other responsibilities can with their pups.

"Here it's all I have to do," he said, adding that the canine connection and the opportunity to contribute to the outside world has given him a better outlook on life.

"It helps keep you driven, helps you see the light at the end of the tunnel," he said.

The dogs live each in its own kennel inside inmate cube housing with their handlers and about a half dozen other men, and can interact with about 280 total inmates on the open Level I unit. Two dog sitters are designated to take over dog care when the inmate trainers need to be elsewhere.

But there are strict rules to keep the pups in training for their working-dog futures. They have to sleep in their kennels, not on beds. They're not allowed in laps or to beg for food, and they have to know that when they're wearing their bandanna it's work time - it comes off for play time. Other inmates must ask the trainer or dog-sitter to pet the dog, even when it is off duty.

Baraga Warden Thomas P. Mackie said he observed the dog-training program in operation at the Chippewa Correctional Facility in the eastern end of the U.P., and said a noticeable mood change in the entire unit where the dogs lived caught his attention and garnered his support for the program.

"I've seen the change they had in Level I," he said.

If all goes well, the puppies will continue rotating into the prison at a rate of about four per year.

The prisoners chosen to train dogs have to apply and go through a selection process, and may show more potential for outside success than average even before working with the dog. Curley said statistics show the trainers do return to prison less often than other inmates after release.

Inmate Richard Hetherington is hoping the dogs will help turn his life around.

"I've been locked up most of my adult life," Hetherington said, "and in 14 years since that started, this is probably the best thing that's happened to me.

"I've lived a selfish life mostly with drugs, but this is doing something for someone else," he added. "I think we get more out of the dogs than the dogs get out of us."