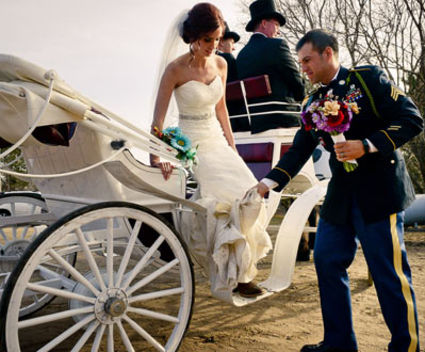 Army Sgt. Cody Bauman and his new bride, Paige Collins, exit a horse-drawn carriage after being married April 11 at Hope Glen Farm in Cottage Grove, Minn. The couple had planned a bare-bones courthouse ceremony, which was all they could afford. Instead, a new group called the Fairy Godmother Project Minnesota organized and paid for a $35,000 wedding that left the couple nearly speechless.

COTTAGE GROVE, Minn. (AP) - The bride wore white, with a veil and a flowing gown. She also wore a nervous grin, the expression of someone who can't believe what is happening.

That's because the bride, Paige Collins, had just been given a $35,000 wedding.

In an historical farm recently, she married Army Sgt. Cody Bauman in a ceremony complete with flowers, drinks, horse-drawn carriage, DJ for the reception dance and food for 130 guests.

"This is really amazing," said the bride, gazing around the party at the Hope Glen Farm in Cottage Grove.

She and the groom had planned a bare-bones courthouse ceremony, which was all they could afford. Instead, a new group called the Fairy Godmother Project Minnesota organized and paid for a wedding that left the couple nearly speechless.

"This just seems way too good to be true," Bauman said. "Why would anyone do this for us?"

The idea for the Godmother Project, which pays for weddings for people in the military, came to Terri Uy-Lennon last fall.

Uy-Lennon, owner of Uy-Lennon Floral and Events in East Bethel, met the bride-to-be while working on another wedding-related job.

While asking about flowers for her wedding, Uy-Lennon said, Collins explained that her fiance was a soldier stationed in Afghanistan. The bride-to-be said they didn't have much money or time to plan a wedding.

"Her story touched me. I have a soft spot for military families," Uy-Lennon told the St. Paul Pioneer Press.

So she approached a friend, Amy Coppersmith who owns Coppersmith Photography of Rogers. "I asked Amy, 'Why don't we adopt her and become her fairy godmother?'"

They played with the idea, and soon the Fairy Godmother Project was hatched.

Coppersmith met with Collins. "She was struggling to get it together," said Coppersmith. "We told her, 'We want to be your fairy godmother.'"

Recalled Collins: "I was kind of shocked."

Uy-Lennon and Coppersmith have dozens of connections in the local wedding industry. They started making calls.

By the time they finished, more than 30 businesses agreed to help- caterers, florists, hairstylists, a videographer, bakers.

The details of a large-scale wedding are overwhelming to any couple. Who would remember to order outdoor gas-power heaters? Or find separate contractors for table linens or lighting?

Uy-Lennon even customized an accessory for Bauman and his Army friends - "bullet boutineers" made of brass shell-casings and blue delphiniums.

The ceremony in a gazebo was preceded by Spanish violin music, as the hyacinths on the trellis gently moved in the breeze. The bridesmaids filed in, wearing sea-foam dresses and cowboy boots.

Next came Bauman, an eight-year veteran of two tours in Afghanistan and one in Iraq.

He wore a uniform laden with about 15 medals and ribbons.

Finally, Collins appeared, with an attendant holding the train of her dress, as four photographers and videographers documented her every move.

When ceremony was done, the groom's father, Jerome Bauman of Buffalo, shook hands in a reception line. "I was ecstatic when I heard about this," he said. "It's awesome. What a great gift."

The party continued in the restored barn, where Kevin Lindee used a cloth to touch up the frosting on the "Orry-Orry-Oreo" cake he had donated.

"This is such a great idea!" said Lindee, owner of Ganache Desserts and Confections in Minneapolis. "I wanted to be involved with this."

Off to one side, Uy-Lennon leaned wearily against a post. "We did it," she sighed. "It's our first inaugural wedding. I haven't really slept at all."

The fledgling group still doesn't have a website or nonprofit tax status, but Uy-Lennon said the first effort was a success. She hopes to keep giving away entire wedding ceremonies to military couples, annually.

Bauman said he and his new wife will be moving to his post at Fort Knox in Tennessee. There, he hopes to enter the Army's Green Beret program.

But before he left the farm, he made sure the people who made the dream-wedding possible felt appreciated.

"There are not enough thank-yous in the world for these people," said Bauman.