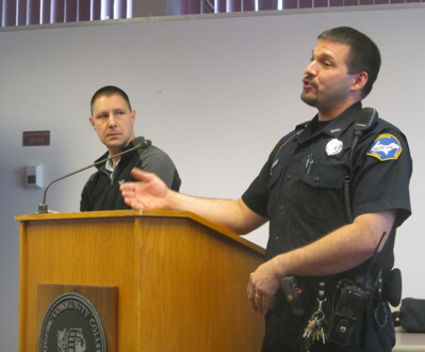 IRONWOOD - Representatives from area organizations and law enforcement agencies came together for a forum on drug abuse in the area, hosted by the Gogebic and Ontonagon Human Services Coordinating Board at Gogebic Community College Tuesday.

The goal of the forum was address local problems with drug abuse, ranging from prescription drugs to methamphetamine.

Lt. Don Horn, post commander for the MSP Wakefield Post, opened the forum discussing the problem with prescription drugs in the community.

According to the Centers for Disease Control and Prevention, 100 people die from drug overdoses every day in the United States and drug overdose death rates have more than tripled in 1990 nationwide.

A presentation by Det. Lt. Timothy Sholander, of UPSET, and officer Matt Sterbenz, of the Ironwood Public Safety Department and GIANT, covered the impact of varieties of drugs across the U.P.

According to Sholander, problems like the spread of meth have pushed organizations together to work in cooperation.

"It's not a just a regional problem, not just across the U.P., not statewide, but across the country," Sholander said. "UPSET covers 12 of the 15 counties in the U.P., and with help from groups like GIANT, we're able to reach a lot further."

"We have mutual aid and have been cross deputized in both states to help," Sterbenz said. "We work together, sharing tips and helping to stop the spread of drugs in the community."

Some of the drugs highlighted in the presentation included cocaine, meth, synthetic drugs, heroin and prescriptions.

"Just because we're in the U.P. does not mean we are safe from these drugs," Sholander said. "It's everywhere."

According to Sholander, many drugs come from the cities. He said dealers will come small communities like those in the U.P. and northern Wisconsin because there is less competition from other dealers. Dealers can also charge higher prices and make more money when selling drugs away from the cities.

A challenge for law enforcement agencies is meth labs across the U.P. Sholander said UPSET has already been called to 23 meth labs this year. Since 2009, there has been a steady increase of labs found by UPSET, starting with five in 2009 and 51 in 2013.

The most common meth making process is a one pot "shake and bake," Sholander said, which consists of people mixing together the ingredients for meth in plastic soda bottles. The issue is many of the chemical ingredients are flammable, and when mixed, the bottle is under pressure, making it dangerous to touch or handle.

The increase of meth labs also makes it difficult for other agencies, such as fire departments.

"When you respond to a fire, you don't necessarily know what's inside," Sterbenz said. "That is the scary part. Many people who have made meth have started fires in the process, causing damage to their homes and themselves."

Throughout the forum, people openly discussed different ways to help alleviate the problem of drugs in the community.

For GIANT and UPSET, it can be as simple as making a phone call.

"We're a small group, and we can't do it all on our own," Sterbenz said. "We hope that people will give us tips and give us a call. We only have so many eyes. We are doing all we can to make this community a better place."