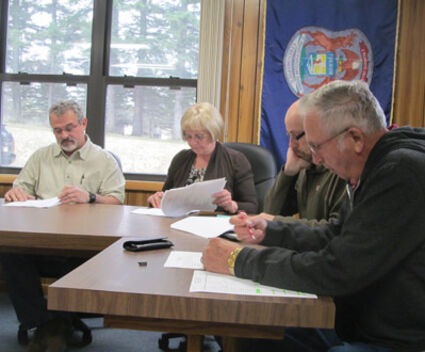 SUPERVISOR ALAN Baron and trustees Kathy Maki, Kevin Lyons and Bernie Brunello look over the agenda during an Ironwood Township Board of Trustees Meeting Monday.

IRONWOOD TOWNSHIP - The Ironwood Township Board of Trustees, Monday, discussed an alternative source of funding to help update its ailing roads.

Four years ago, the township passed a four-year millage to help pay for a fire truck. The fire truck has since been paid for, allowing the board to drop the 1 mill from the taxes.

However, supervisor Alan Baron asked the board if it should explore the option of using the 1 mill to help pay for road repairs.

"Should we move forward and have the citizens vote on it," Baron said. "It won't change their taxes at all, because the 1 mill could stay in place. It's what they are paying already, if they vote to move forward with it."

The current millage in the township is 4.2714, and according to treasurer Jyl Olson-DeRosso, it's one of the lowest in Gogebic County.

Olson-DeRosso asked if the board could be specific on what it would spend the money on in the language on the ballot, for example, focusing on Section 12 and Vanderhagen roads specifically.

Instead, the board thought it could simply follow it's five-year roads plan and work on specific projects in order.

"We have been putting off many of these projects because of the lack of funding," Olson-DeRosso said. "We want to keep the township moving forward, and this will allow us to do that."

Some board members also questioned whether 1 mill would be enough. Trustee Bernie Brunello said maybe the board should ask for 1.5 mills.

"One mill isn't going to get you very far," Brunello said.

The board decided to look into deadlines to have the item put on the ballot in November.

The board heard an update from Brunello on the Gogebic Range Water Authority, which is currently in negotiations regarding a possible rate increase.

According to Brunello, the authority wants a 3 percent rate increase to help pay for general maintenance of the plant. He said he does not want to increase water or sewer rates for township residents.

The board echoed Brunello's comments, saying it was "adamantly" against the proposed increase.

"They have all this money set aside from the different municipalities to use for maintenance," Lyons said. "Why not use it?"

Brunello said he would like to see the authority re-work it's budget to avoid another rate increase.

A letter was received from Dean and Pope law offices in Ironwood regarding the township's contract with the Ironwood Carnegie Library.

Last month, the board moved to rescind it's contract with the library because a resident recommended by the township board was not placed on the library board.

According to township board members, the letter received talked about a "miscommunication," and how it seemed the contract was still in place.

"We made it very clear who we wanted," Lyons said. "Any miscommunication would be between the library and the Ironwood City Council."

A motion was approved to receive the letter and place it on file, and have attorney Mark McDonald write a letter in response.

The board approved the hiring of Casey Carlson and Matthew Jackson as summer employees, and approved to move its next meeting to May 27 to avoid the Memorial Day holiday.

Trustee Kathy Maki asked if the township could put together a "welcome" packet for new residents in the township, including ordinances, township newsletters and information on the parks.

"We talked about doing it in the past, and we never got anywhere," Maki said. "I would like to see this done."

Scott Carlson, of the fire department, spoke to the board about the department's annual Mother's Day brunch fundraiser. According to Carlson, this year might be the last one because of poor turnout.

"It's a lot of work for us, with very little profit," Carlson said.

Some members of the board suggested the department brainstorm different fundraising ideas.

Carlson said he would like to include a survey in the end of the year newsletter through the township office to see if residents still want the department to host it.