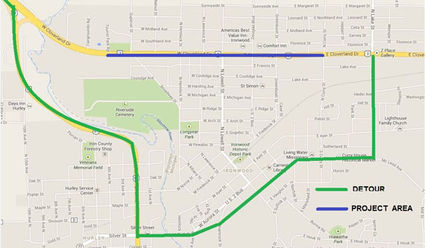 THE MICHIGAN Department of Transportation (MDOT) is reconstructing 1.3 miles of US-2 in Ironwood, from Tourist Park Road to Curry Street, pictured above. Work includes utility upgrades, sidewalks and construction of a center left-turn lane at US-2 Business Route (Douglas Boulevard). On May 14, the contractor will begin improvements to the detour route, including milling and paving, pavement marking and lane assignment modifications.

IRONWOOD - With a May 19 start date set for the beginning of a two-year U.S. 2 reconstruction project in Ironwood, the city commission approved the project's funding at its meeting Monday evening.

Both years, or phases, of the U.S. 2 project, are part of a larger Phase III water and sewer project. Phase III also includes water and sewer work in part of the neighborhood north of U.S. 2 and west of Lake Road, and some work in Norrie Location.

The commission passed ordinances to call for the sale of bonds to fund the $8.2 million sewer and water project. The city did receive a $611,000 U.S.D.A.-Rural Development grant to help with the sewer work.

As part of a number of financial moves, the commission also approved rolling the refinancing of the 2010 A water (nearly $1.4 million worth) and sewer (nearly $1.7 million) bonds into Phase III, reducing the interest rate on the previous debt from 4 to 2 percent.

City treasurer Paul Linn said city officials and attorneys will gather May 23 in Gladstone to close on the bond sale. The length of the bonds will be 40 years.

Before the project begins, city manager Scott Erickson said there would be some spot paving on McLeod Avenue that will be used as part of the detour of east bound traffic this year, as well as work on the intersection of Lake and Ayer streets, also because of the detour.

After some discussion started at a recent public forum, Erickson suggested the commission OK a 30 percent reduction in water bills for businesses along the construction route, if their meters can not be reconnected to a temporary water supply. The reduction would only be on the commodity used.

Erickson said there will soon be a meeting with neighborhood north of U.S. 2 to discuss the water and sewer work there.

Let run until May 19

Erickson said the city is continuing its let-run policy through at least May 19, and will at that point ask people to stop and will begin making the needed meter readings.

Community Development Director Michael Brown said a draft of the comprehensive plan is now open for public review and is available online on the city's website: cityofironwood.org.

In other action, the commission:

-Presented a plaque of appreciation to members of the Luther L. Wright High School JROTC for helping with Saturday's citywide cleanup day.

-Also presented a plaque of thanks to Lt. Col. David Manki of the LLW JROTC for his years of service, as he is retiring this year.

-Approved the sale of scrap metal to Chicago Iron, including old water meters and pipes, at a rate of $220 per ton for iron and $2.05 per pound for brass.

-Heard a presentation from Paul Kostelnik about an art competition set for this summer, to include a display of 12 works of art in the Miners Memorial Heritage Park from June 28 through the last week of July. He said the Friends of the MMHP are raising funds for prizes, hoping for a top prize of $1,000.

-Discussed repaving 3.4 miles of roads in Riverside Cemetery. Erickson said pulverizing and repaving would cost about $100,000. There is $500,000 in the perpetual care fund, but it will take an ordinance to allow using the money, with the promise of paying it back. The commission OK'd drawing up such an ordinance. Erickson said afterwards, there are also 1.6 miles of unpaved roadway in the cemetery.

-Gave Ken Farhner until the first commission meeting in June to clean up property at 400 Cedar St. Commissioner Rick Semo said Farhner had made progress in cleaning up the mess since the snow had melted.

-Heard complaints from Farhner about blight in his neighborhood around his home at 117 May St. Erickson said blight and other notices have been sent. He said city officials would continue to look into the matter.

-Heard the Kiwanis Pancake Day is Thursday at Tacconelli's.

-Heard the Miners Memorial Heritage Park clean up day is Saturday, beginning at the Hiawatha statue at 9 a.m.