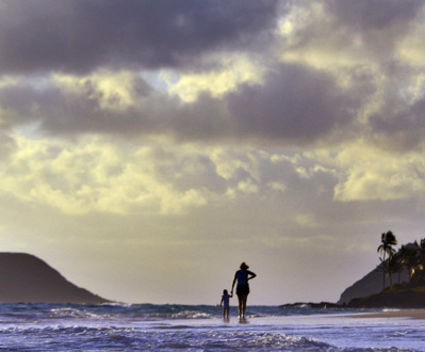 HONOLULU (AP) - The first hurricane expected to hit Hawaii in 22 years weakened slightly Thursday as its outer edges began to bring rain and wind to the Big Island, while residents and tourists prepared for a possible one-two punch as another major storm lined up behind it in the Pacific.

The eye of Hurricane Iselle was about 250 miles southeast of Hilo, moving at roughly 17 mph and expected to make landfall Thursday evening, according to the National Weather Service. Meanwhile, Hurricane Julio strengthened early Thursday into a Category 2 storm but was forecast to pass just north of the islands sometime Sunday morning.

Hawaii Gov. Neil Abercrombie said the state is prepared for the back-to-back storms, noting the National Guard is at the ready and state and local governments were closing offices, schools and transit services across Hawaii. Emergency shelters also are being opened across the state.

Earlier Thursday, a 4.5-magnitude earthquake struck the Big Island but didn't cause major damage. There were no reports of injuries as residents made last-minute trips to grocery stores and boarded up their homes.

Kelsey Walker said the quake felt like a "little jolt" but didn't knock things off shelves at the Waimea grocery store where he works. He was trying to keep a sense of humor about it.

"We have a hurricane. Now we have this on top of it. What else?" Walker mused.

Travelers got their first word of disrupted plans Thursday, when commuter airline Island Air said it was canceling some afternoon flights between the islands and shutting down all operations today.

Hurricane Iselle was expected to bring heavy rains, winds gusting up to 85 mph and flooding in some areas, but officials said the Big Island's mountainous region and size should help break apart and weaken the storm as it passed on to Maui and Oahu late Thursday and early today.

"Not a major hurricane, but definitely enough to blow things around," said meteorologist Mike Cantin of the National Weather Service.

Hawaii has been directly hit by hurricanes only three times since 1950, though the region has had 147 tropical storms over that time. The last time Hawaii was hit with a hurricane was in 1992, when Iniki killed six people and destroyed more than 1,400 homes in Kauai, meteorologist Eric Lau said.

Hawaiian Airlines waived reservation change fees and fare differences for passengers who needed to alter their plans Thursday and today, while some travelers remained optimistic.

Boston resident Jonathan Yorke and his wife booked a Hawaii vacation with their two daughters last year. He has been watching the news to see how the storms could affect their two-week trip to Maui and the Big Island.

"We're all optimists, so we'll make the best of it," Yorke said.

Washington state couple Tracy Black and Chris Kreifels made plans to get married in an outdoor ceremony on the Big Island on Saturday. They spent this week getting a marriage license, adjusting plans and communicating with worried guests on the mainland.

"We see the rain as a blessing," Black said. "It will work out as it's supposed to."

Some residents, meanwhile, are voting early in the primary elections that include congressional and gubernatorial races.

Officials at Mauna Kea Observatories, a collection of 13 telescopes operated by astronomers from 11 countries located around 14,000 feet atop a dormant volcano on the Big Island, said the site was being secured and that visitor stargazing will be canceled Thursday night.

"It's starting to get gusty on the summit of Mauna Kea," said the observatory's Gwen Biggert.

But the telescopes are in no danger, said Roy Gal, astronomer and outreach specialist for the University of Hawaii Institute for Astronomy.

"Winds of 80 to 100 miles per hour are actually not uncommon on the summit," Gal said. "We get tropical storms all the time which get comparable winds to a Category 1 hurricane."

The storms are rare but not unexpected in years with a developing El Nino, a change in ocean temperature that affects weather around the world.

Ahead of this year's hurricane season, weather officials warned that the wide swath of the Pacific Ocean that includes Hawaii could see four to seven tropical cyclones this year.