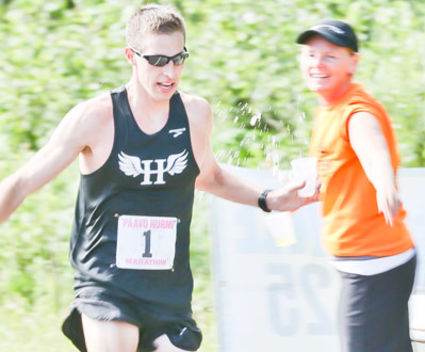 Ben Schneider of Minneapolis receives a drink from volunteer Cheryl Lintanen of Ironwood at mile 25 on U.S. 51 south of Hurley during last year's Paavo.

His wife, Candice, is nearly fully healthy after winning last year's Paavo Nurmi Marathon with a nagging injury and then picking up her second best marathon time at Boston despite still battling the injury.

Ben is the all-time winningest men's marathoner in Paavo history. Mary Bange and Ann Heaslett both have eight total wins, so a win Saturday would put Ben ahead of them. Like Ben, Ann won eight in a row from 2001 to 2008. Bange's wins came over a span of nine years from 1976 to 1984

Candice has a few years to reach Bange and Heaslett, but time is on her side as she is only 29.

Her streak was in jeopardy last year as she battled a hamstring injury that has finally been treated, even if it hasn't fully gone away yet.

"I finally got it diagnosed correctly; it was actually hamstring tendinopathy," Candice said.

She agreed to do experimental platelet-rich plasma injections like a lot of football players are doing. But she didn't do it until after the Boston Marathon because it put her on the shelf for two weeks to a month. Her time at Boston was 3:09:57, her second-best time, even with the injury. The extra crowd support from all those who came out to support the first race since the Boston Marathon bombings probably helped.

"I really wanted to do the Boston Marathon because of everything that happened with the bombs in 2013," Candice said. "I just felt like I needed to go and run. I did that. I actually did really well."

Her injury has been a lot better since then. She has been doing a lot of physical therapy.

"It's like a tightness now," she said. "It's not a painful thing when I run. Last year, going into Paavo, I was about 70 percent of my normal self. I'm at about 90 percent I would say now. Every day is not painful, so I'll take it."

There's always pain during a marathon, but it's not supposed to be like what she went through.

"I probably shouldn't have run Paavo last year, but I wanted to keep the streak alive," she said. "I can go into it a lot calmer this year. Last year, I was just panicked I wouldn't even finish, but I did."

This year, she's hoping to keep the streak going without those worries. It's impossible to predict because one doesn't know the field of runners from year to year.

"I think I'm in good enough shape, it's possible I could maybe beat my Boston time at Paavo," she said. "But we'll see. I don't see why I wouldn't at this point."

"I'd like to be close to my fastest time up there," Ben said. "It'd be nice if the weather cooperates and everything. I had my best marathon to date this spring. It makes me twice about what I can do, I guess."

Schneider finished in 47th place overall at the Boston Marathon in 2:23:56.

"I was really happy with it," Ben said. "My time sort of plateaued right around 2:27ish and then to suddenly knock three minutes off my PR was really surprising, but a really good surprise."

"That's probably what was a big factor in running faster than I have before; there was so much energy in the crowd," he said. "It was amazing to see all the people that turned out, even on Boylston Street, on the same spot that the bombs went off the previous year. It was just packed, as far back as they could fit. With all the stories recounting the lives of all the people that were affected - as we were approaching, you could lean back on the stories that you heard when it got tough later in the race, sort of."