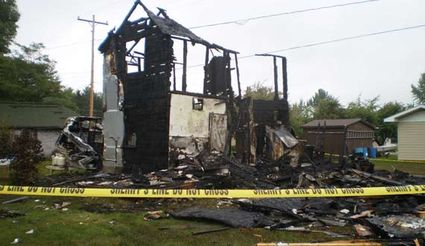 AN EARLY morning explosion and fire at 426 Minnesota Ave. in Ontonagon destroyed an unoccupied house. On the left are twisted remains of a camper which was next to the two-story structure. Police have not released the name of the renter of the home. No one was harmed. The incident remains under investigation.

ONTONAGON - The cause of an early Monday morning fire and explosion in Ontonagon remains under investigation, according to the Ontonagon County Sheriff's Department and Michigan State Police.

A fire marshal was on the scene of the fire, reported at 1:23 a.m. Monday. It demolished a two-story building at 426 Minnesota Ave.

According to neighbors, two young men saw flames in the house as they drove by and broke in the door and yelled to see if anyone was inside. Shortly after that, neighbors said they heard the first of several loud booms or explosions. Police said the multiple explosions were not gas-related.

At first firefighters did not know if the structure was occupied, but deputies later learned the resident of the home, who was leasing the unit, had traveled to Louisiana with his dog on Saturday from Marquette.

A sheriff's department spokesperson said all nearby residences were evacuated.

A neighbor said one of the oxygen tanks in the house exploded and flew several hundred feet.

Officials sifted through the rubble to determine if anything else could have caused the three booms that many in the neighborhood reported hearing.

The ruins are cordoned off and state police remained at the scene Monday evening.