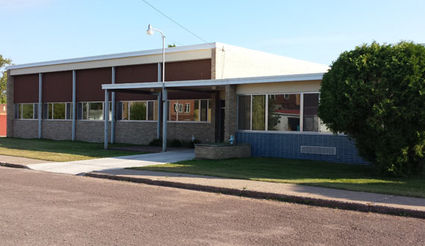 FATHER DANIEL HALL, shown above, on Maria Lane in Wakefield, will likely become the new City Hall. The City Council unanimously approved to enter into a lease-to-purchase agreement with the Diocese of Marquette at a special meeting Wednesday. A preoccupancy report and building inspection must be completed before the agreement can take effect on Oct. 1.

WAKEFIELD - Wakefield City Council members entered into a lease agreement Wednesday with the Diocese of Marquette for Father Daniel Hall, located on Maria Lane, which the city plans to use as its new city hall.

The city will pay rent of $166.67 cash per month, along with utilities and general maintenance of the building.

The one-year agreement is set to take effect Oct. 1 and the city has the option to purchase the property for $100,000 at any time, with previously paid rent, insurance and closing costs to be prorated at the time of purchase.

"The lease was really put in place to buy us time," City Manager Margot Rusinek said. "We have every intent of purchasing the property."

City officials said they don't intend to raise residents' taxes and will look to purchase the building from its own budget or through grants.

The agreement also requires the city to not collect utilities from the Immaculate Conception Church and Rectory for the period of the lease.

A preoccupancy report will be performed by the city based on a building inspection. If anything in the building is determined to be unacceptable, the city can cancel the agreement with no penalty.

If the city decides to back out of buying the property, it would owe the diocese $10,000.

The agreement doesn't give the city an option to renew the lease, but city officials said they weren't concerned with being kicked out if they decide not to purchase within the next year.

"You never say never; however, the diocese is determined to divest itself of the building and they've worked very, very good with the city to get us to this point," said council member Richard Bolen. "I think if we run into some heavy lifting where we may need an additional year, I think they'd work with us. But their hope, and certainly our hope, is that we can make this happen by Oct. 1 of next year."

The city won't be able to move its operations until October and plans to move in the new building as is, without performing any major renovations. The diocese made major roof repairs last year and has installed a handicap ramp.

However, minor updates to restrooms will be done to make them handicap accessible, Rusinek said.

"It will be much more economical to renovate that place then to renovate (City Hall)," Mayor Les Schneck said.

As for the City Hall building, a historic preservation agreement with the state is in effect until 2017.

"What that says is that we agree with the state historic office that, should we completely evacuate this building, we will pursue finding a buyer who will attempt to preserve the history," Rusinek said. "If that's not possible after a year, we can sell the building without that agreement in place. And the last resort is we have the right to tear the building down, should it become an eyesore."

The city garage will remain at its current location, but council members said it needs to be replaced whether city operations were to move from City Hall or not.

Rusinek said the plan is to keep City Hall "minimally heated, lowest operating cost, while we determine what we're going to do."

The City Hall itself is in need of renovations, officials said. A 1988 report the city had done by an architect determined renovations for the building would cost $340,625, which officials said has increased.

City Hall is also not in compliance with the Americans with Disabilities Act.

"The biggest hurdle for this building is that it's not truly handicap accessible," Rusinek said, "and for that you would need an elevator or a lift."

Additionally, the operating costs of keeping the building running are increasing.

"The ongoing costs are going up by leaps and bounds because the boilers are shut down and all kinds of other things are starting to become big problems," Rusinek said. "The cost is increasing beyond utilities, so every year we're throwing money at problems, rather than repair or remodeling."

Bolen said moving the city's operations to Father Daniel Hall was an opportunity that couldn't be passed up, mentioning the hall also hadn't been used frequently by the church.

"They were determined to divest themselves of Father Daniel Hall and the city was the first on the list," he said. "They gave the city the first chance at it, and if we would not have taken this opportunity, I think folks in this town would have been very disappointed with us. Because this is everything that we need and want."

Around 30 people attended a town meeting that was held at Father Daniel Hall following the council's special meeting where Rusinek and council members explained the lease agreement and also listened to concerns and suggestions from the audience.

The space was also proposed as a possible community gym or a place for people to hold various events and programs.

City officials told the audience there would be several more meetings regarding how the space at Father Daniel Hall will be occupied and encouraged residents to contact them with ideas and suggestions.