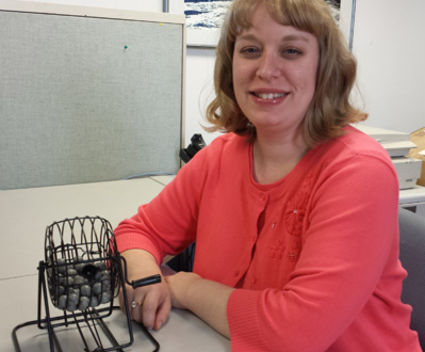 MARISSA CASARI, circulation supervisor at the Daily Globe, will draw two daily BINGO numbers that will be published in upcoming editions of the newspaper. BINGO cards will be in Tuesday's edition, with numbers to begin Wednesday.

IRONWOOD - The Daily Globe is bringing the thrill of Bingo to subscribers' front doorsteps on Tuesday and awarding a $500 prize to one lucky reader.

The newspaper will begin its annual Bingo game for readers with an official card being placed inside Tuesday's paper.

But the game isn't only for subscribers. Anyone can pick up the Daily Globe to participate in the chance to win.

"This is at least our fourth or fifth year," Marissa Casari, circulation supervisor, said about the game. "Most people have played by now so they know what's going on."

"Starting on Wednesday, there will be two Bingo numbers put in the paper every day, so if you have the number, of course, mark it off. We're looking for a full black-out Bingo," she said.

The blacked-out Bingo card will need to be verified by Daily Globe staff for the winner to be awarded $500.

"They can either bring it in personally, they can mail it in, if for some reason they are out of the area, they could fax it in, but I've never had anyone do such a thing," Casari said.

Even if you don't win the big money, that doesn't mean you can throw your Bingo card away.

"All the other cards can be turned in for our second-chance drawing," Casari said.

There are usually 10 second-chance winners who will get various prizes.

After the $500 winner is announced, Bingo players will have two weeks to get their cards to the Daily Globe.

Second-chance winners will then be drawn.