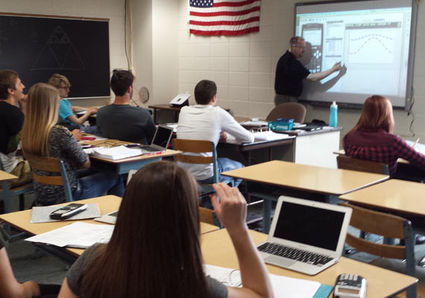 HURLEY SCHOOL DISTRICT juniors and seniors in advanced mathematics learn from teacher Ryckie Holm as he uses a Smartboard in the classroom.

As the screen at the front of the room lit up with "math mountain" problems displayed by the projector installed on the ceiling, a teacher calls on students to answer the addition and subtraction equations.

After the student answers, red numbers start appearing on the screen, as if written by a ghost or an invisible Einstein.

But it's not magic, witchcraft or spirits.

From the back of the room, Tony Bunt, the second grade teacher at Ironwood Area School District, wrote the answers on a wireless chalkboard, just one of the many technologies teachers are using in the classroom these days.

"There's so much technology, it's tough to keep up with it," Bunt said, who helped train district staff members to use some of the new technology, such as the MOBI wireless chalkboard.

The district also has clicker systems connected to a teacher's computer that show students' selections to multiple choice questions, which allow the teacher to immediately view student learning. It's also in the process of buying a device called the Swivl, a robotic camera that swivels as it follows a speaker who's holding a microphone connected to the device.

The Swivl is equipped with Cloud technology allowing it to connect with other computers and mobile devices, as well as a slot that iPads can be plugged into, which acts as a screen displaying what the camera records.

Lessons and presentations would be recorded for students to watch at home and come to class prepared to discuss.

In addition, Ironwood students have access to Chromebook laptops in the classrooms.

Some of the technology was purchased through a bond proposal, but most came from the district's own budget.

"If you're going to make a change for the positive, sometimes you have to bite the bullet," said Superintendent Tim Kolesar. "When we start making this transition, we know that we've got to teach kids differently. Kids learn differently."

Wakefield school just opened a new Chromebook Lab this year, Watersmeet provides all K-8 grade students with the laptops, and Bessemer just implemented the use of Chromeooks at its high school, with 25 more on the way for elementary students.

Bessemer Principal Dan VanderVelden said the school's staff is being trained on a blended classroom, which provides students with in-class instruction, and a technology side that lets students learn through online courses.

"The main focus is how to blend technology into the classroom and get students college and workplace ready," VanderVelden said.

Clicker systems and Smartboards, which work like a digital chalkboard with touch-screen technology, are frequently used in many schools.

"I think the benefits of increasing technology and getting it integrated in the classroom is that kids can learn anytime, anyplace, anywhere," VanderVelden said. "That's kind of the motto with this new blended training. It really increases student engagement. ... With increasing technology in the classroom it provides our special education or struggling students with different ways of learning things, instead of direct instruction from the teacher."

Steve Kass is an educational technologist with the Regional Educational Media Center in Michigan.

There are 28 REMCs across the state providing tech services and training to local schools. REMC1, where Kass works, covers the Copper Country and Gogebic-Ontonagon intermediate school districts.

"Technology is playing a bigger role in all of our lives," Kass said. "This is made evident by the cars we drive, the way we shop, how we communicate and the jobs we have. Our classrooms are designed to prepare our children for the world they will live in."

Kass said the benefits of technology in the classroom allow teachers to provide students with better "learning opportunities and individualized accommodations." However, there can be downsides.

"Technology is only as good as the user," he said. "Without proper training, the technology is not as effective as it was designed to be."

The GOISD schools have been taking an active approach to providing technology in the classroom, Kass said, with an increase of iPads, Chromebooks, updated desktop computers, projectors and WiFi access.

Over the border in Wisconsin, Hurley School District was the first in the state to provide one laptop, a MacBook Air, for every one of its high school students.

The one-to-one program is in its fifth year, said Jeff Gulan, principal for 7-12 grades.

Additionally, as of this year, the district's been able to provide each core classroom-science, math, language arts and social studies-with a laptop cart holding a number of computers that students have access to in class.

Gulan said the district has a three-year lease on the technology that costs about $500,000, excluding all the fees for additional hardware or software.

"It's a big investment in our education," he said.

Smartboards, projectors and blended classrooms are also part of the environment at Hurley.

With laptop bags holding around $900 worth of equipment strapped around students' shoulders, Gulan said students are beginning to appreciate what they have and it has cut down on horseplay in the hallways.

Roy Haeger, a teacher and technology director at the Hurley district, said learning with technology is more than keyboard typing and Internet browsing.

"When you've got these kids hooked into a computer, you can put a lot of the exploring, searching and problem solving right on them," he said. "So I don't have to just sit on a blackboard and write down ideas or ways you do something. I could have them sit right at the computer and just have them find it."

But students don't learn how to do those things by reading a textbook.

"I don't have a textbook anymore, it's all online," Rye said. "When (students) need a textbook we go refer to a Wiki page where I have things posted on there."

And allowing that technology in the classroom makes the learning process more relevant to real life, Haeger said.

"We have to be a conduit to the outside world and give them that immediate answer and response they're used to everywhere else they go," he said.

However, there is one concern Haeger has for technology's future in the classroom.

Not all schools can't afford the latest tech gadgets, and some have started a BYOD-bring your own device-program, Kass said.

"That's great, it saves the school money, helps out with liability and stuff like that, but the thing I worry about is the level playing field," he said.

Currently, Hurley students have the same computer and software, but Haeger said what happens if the funding ever dried up?

"Who knows what the money is going to be (in the future)," he said. "If we're going to be forced into doing something like that (BYOD) ... I can't imagine taking a step back from this when the kids are used to it."