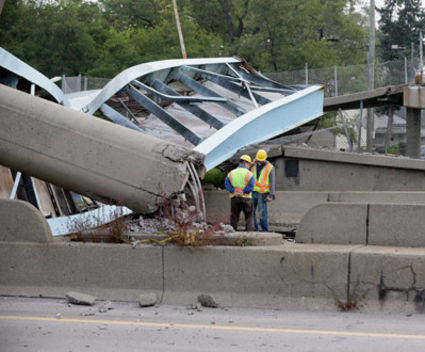 Investigators look over the scene of a collapsed pedestrian bridge over the Southfield freeway in Detroit Friday.

Two other vehicles were struck by debris, but no one else was injured, Michigan State Police Lt. Michael Shaw said at the scene.

"If this would have happened maybe an hour later it would have been a lot worse," he said.

The west side bridge is about two blocks from Cody High School. Reports of its collapse came into police about 6 a.m. They determined a boom on the truck was extended too high to go under the bridge. When the boom struck the bridge, it pulled the overpass down, Shaw said.

State officials said the bridge, nearly 15 feet above M-39, known as the Southfield Freeway, was in "fair to good" condition, meaning that it was safe for use before being hit by the truck. No one was on the bridge when it fell, Shaw said.

Traffic on the roadway below was fairly light because the crash occurred just at the beginning of rush hour.

Barnika Cage, who lives a block from the bridge, told The Detroit News she heard a "boom," went down the street and saw that the bridge had fallen. She said she saw a man get out of the truck, stumble, and then fall face first on the grass along the freeway.

"There was blood all over his face," Cage said.

Shaw said the driver, whose name has not been released, later died at a Detroit hospital. He wasn't wearing a seat belt, which may have been a factor in his death, Shaw said.

About four hours after the crash, the truck was on the side of the freeway with its windshield wipers still moving.

Part of the bridge's span lay mangled atop the pavement on the freeway's northbound lanes. The span over the southbound lanes was twisted above the ground. Concrete support pillars were wrenched from their bases, exposing steel reinforcing bars.

Detroit Lions quarterback Matthew Stafford was among the first drivers to stop at the scene. Stafford, who was on his way to the team's practice facility in Allen Park to prepare for Sunday's road game against the New York Jets, was picked up by team security.

The bridge was inspected by state officials in May and was due to be replaced in 2017, according to Diane Cross, a spokeswoman for the Transportation Department.

"All bridges have a lifespan, but this bridge had another three years in it," Cross said. "It was not a structural issue. The only reason it's down is that the truck pulled it down.

"I would imagine if it brought down this bridge, most bridges would get knocked down the same way."

Traffic was forced off the freeway in both directions. Crews hope to clear the bridge from the road and reopen the freeway Friday after police complete their investigation.