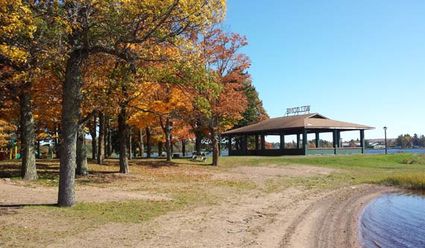 WAKEFIELD-MARENISCO students in a Life Skills class are volunteering to help the city of Wakefield with a few projects, one of which being a community-sized fire pit near the Eddy Park Pavilion at Sunday Lake.

WAKEFIELD - Students at the Wakefield-Marenisco School District will be volunteering to help the city with a few different projects expected to start next week.

Wakefield's City Council Monday approved a proposal to allow students in Chris Tweiten's Life Skills class to perform some tasks for the city.

"What we have is, for this Life Skills class, we're kind of doing community enrichment projects and the city has volunteered to let us work with them," Tweiten said.

Tweiten said he has about 27 students in the class working on various projects in the community.

City manager Margot Rusinek said one group of students will work on designing and building signs for each neighborhood location, which are "typically named by the mining activity.

"In my opinion, this project is an opportunity to preserve our mining heritage and add character to each locale," Rusinek told city council members.

Students will submit a proof of the sign prior to construction for approval by the council.

Another group of students will be constructing a community fire pit near the Eddy Park Pavilion at Sunday Lake.

"We see that as a great addition to the pavilion and to how people use that area," Rusinek said.

She also mentioned that type of attraction will enhance the amenities already in place for large gatherings, and the pit could be used for story-telling, music and during other cultural and social gatherings.

Both student groups may also receive some assistance from the city's public works department, and the city plans to keep costs low for the projects by asking for donated materials.

Tweiten's students have volunteered not only for the city, but others have visited the Gogebic Medical Care Facility, where they interact with residents, participate in exercise programs and help with a variety of other activities.

So far, the group has volunteered a few Saturdays and a Thursday or two to help with the older folks, decorate the garden and play games.

Part of the class, students said, was giving back to the community.

"We're trying to get the word out that teenagers can volunteer and help the community," Wanink said. "It's a really good idea, it's super fun and it's a good experience."

Tweiten lets the students brainstorm and choose the projects because he said they are more involved and engaged with ideas they are passionate about.

"These are the things they wanted to do and I've tried to make it happen ... and the city of Wakefield has been great," he said. "Really anything we can do to just help our community for the better, that's kind of the goal of this program."