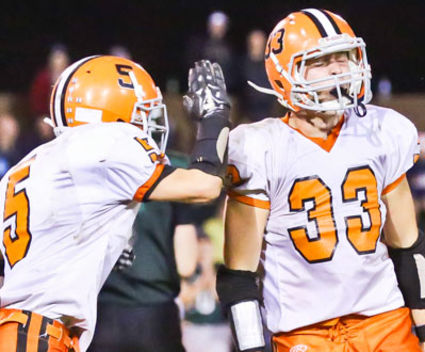 Hurley's Mitchell Maki celebrates his tackle for a loss of Gogebic's Shane Cole in the third overtime of Friday's game against Gogebic at Massie Field in Bessemer. Cole Huotari gives him a pat on the shoulder.

BESSEMER - Even triple overtime didn't seem like enough to settle this one.

Hurley's Devin Czerneski ran in from one yard out in the third OT to give Hurley a 32-26 Great Western Conference victory over the Gogebic Miners Friday night at Massie Field.

The Miners fought back from a 14-0 halftime deficit to force overtime, all while shutting out Hurley in the second half.

The teams went blow for blow in the first two overtimes before Hurley made the only stop of overtime, forcing quarterback Kevin Lane out of bounds at the 1 yard line on fourth down.

Hurley had third down and goal at the 1 and the Midgets called the same play they called in Crystal Falls two weeks ago while at the 1 yard line. Czerneski did the same thing: He scored and won it for Hurley on the last play of the game. The play doesn't allow the defense much time to penetrate.

"It's a tough play to stop, especially if you get a little bit of a line push and a kickout block," Hurley coach Scott Erickson said.

It's the third straight week of living on the edge for Hurley. The Midgets came back to beat Crystal Falls Forest Park two weeks ago, then lost on a late comeback last week to Northland Pines and then pulled off Friday's thrilling victory.

"I'm proud of the way our kids fought and hung in there," Erickson said. "We made some nice plays in the first half to build a lead and then made some mistakes in the second half to give it away. It was frustrating as a coach and it was exciting and rewarding that our guys could figure a way to pull it out of here."

It was the second straight crushing defeat for Gogebic, which fell on a late rally to Lake Linden-Hubbell last week.

"I told them, 'Anybody in any way hates to lose, but this has got to be a confidence builder because Hurley's a great team and we had them'" Gogebic coach Mark Mazzon said.

The Miners made their second-half push with a lot of pride, he said, and the last time his team played that hard was last year's playoff game.

"Our kids had a lot of pride and came back and fought like hell," he said. "They just did an outstanding job to come back from a 14-0 deficit. I'm just so proud of them."

The Midgets took early control of the game with two big pass plays in the first half.

The first came when James Sukanen hit Jake Tenlen for a 53-yard touchdown. Hurley was up 6-0 with 1:19 left.

Gogebic marched to the Hurley 32 on the ensuing drive, but Ronnie Nickel picked off a Kevin Lane pass. Hurley went 68 yards in 12 plays, capped by another long pass. On fourth and 17, Sukanen hit a wide-open Mitchell Maki for a 38-yard TD. Czerneski's two-point conversion made it 14-0 Hurley.

That held into the second half, where things started going Gogebic's way instead.

Gogebic was forced to punt on its first possession of the half and Maki muffed it. Gogebic's Ben Bogaczyk recovered it at the Hurley 8. Three plays later, Shane Cole ran in four yards for a touchdown. Lane hit Cole for the conversion to pull within 14-8.

"I misjudged it," Maki said of the punt. "I seen a guy coming and I thought I was right under the ball, but it was short, so I went down to get it and it went right through my hands."

Erickson said, "That swung a lot of momentum. We had the ball coming out of halftime and went three-and-out and that's unacceptable, too."

Hurley couldn't take advantage of a Gogebic fumble later in the quarter as the Miners stopped Hurley for no gain on fourth and 3 at the Gogebic 5 on the first play of the fourth quarter.

Gogebic took over and went 95 yards in 16 plays. Lane capped the drive with a one-yard touchdown run. The extra point was blocked by Jacob Saari, leaving it tied at 14-14 with 3:58 left in the game.

Hurley went three-and-out on the next possession. Gogebic had two chances inside the Hurley 30 to score, but Lane was called for intentional grounding on the second, leaving Gogebic with one more chance from the 40, but Maki intercepted it as time expired.

"We had our heads down," Maki said. "But we kept picking each other up. We knew if we kept going and we showed our hearts, we'd get it and we did."

Overtime was just as crazy.

Gogebic got the ball first and faced fourth and goal at the 13. Lane found Cole with a perfect pass down the middle and the 20-14 lead. The two-point pass failed as Ronnie Nickel deflected it.

The Midgets went first this time. They scored on third down as Jake Tenlen went outside on a quarterback keeper and pitched to Maki, who got in the end zone. The two-point pass was no good.

Paul Buerger scored two plays into Gogebic's drive, from two yards out. The extra point kick by Daniel Barber-Frances was just wide left and overtime No. 3 was on the way.

Hurley stuffed Gogebic for a yard on first down, allowed four on second and pushed Cole back a yard on third down. Lane scrambled outside on fourth down from the 6. Huotari hit him and forced him out of bounds at the 1.

"He came flying out of nowhere," Erickson said. "Lane was tough to contain for us all night. He just got to the edges and our contain was not where it needed to be, but those guys noticed him and made a good punch on him on the way out of bounds."

The Midgets just had to score this time and they did.

On third and one, Czerneski made Hurley go home happy as he rushed into the end zone and a mob of teammates rushed to him.

Czerneski said there was more pressure to this triple-overtime run than the same play he also converted on the last play of a 18-14 win over Crystal Falls two weeks ago. He just went left this time instead of right in Crystal Falls. Hurley would have lost that game; it had another down Friday if he didn't make it.

"It's the same feeling; you want it," Czerneski said. "All the blocking up front, everyone ran that play perfect at the end."

Hurley didn't seem to worry about its second-half troubles once overtime started.

"It's ridiculous how much heart they have," Tenlen said. "I'm proud of all of them. They could have given up at any time, but they didn't."

With the win, Hurley clinched a 17th straight playoff berth and at least a share of the GWC title.

"I'm so proud of our kids and how they answered the bell," Erickson said. "A lot of kids trying to play really hurt tonight. Hats off to Gogebic kids. They've got a hell of a ballclub."