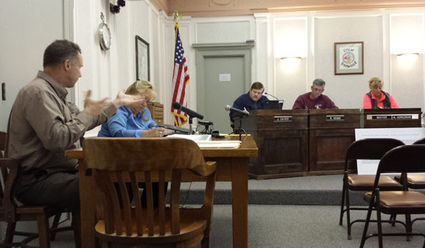 IRONWOOD - The city of Ironwood is pursuing reimbursements for expenses regarding infrastructure repairs following damages resulted from this past winter through Section 19 of Michigan's Emergency Management Act.

Gov. Rick Snyder opened up the application period for Section 19 funding on Aug. 27.

Under Section 19, eligible communities are able to seek up to $100,000 or 10 percent of their previous year's operating budget, whichever is less, for reimbursements through the state's Disaster and Emergency Contingency Fund.

A meeting with state officials was held in Marquette on Sept. 23 to discuss Section 19 and the application process.

City Manager Scott Erickson said some of Ironwood's previous expenses regarding repairs to damages are eligible, "So we'll take a look at that and try to get as much of that funding as possible," he said. "And then, we actually have a list of 15 locations in town that we feel we need to replace the watermain at that was damaged."

Erickson said he expects to get a couple of those locations repaired with funding through the Urgent Need grant the city is in the process of applying for, "and then we'll go next on our list and pick off the next location," he said, "if we get enough funding to do another location in town to replace watermains and that."

The city was recently notified of its eligibility to receive $531,299 in grant money through the Michigan Strategic Fund, which was set aside to assist communities with infrastructure repairs following the Deep Freeze.

Erickson said the city has documented $1.7 million through direct expense, staffing and overtime as a result of the damages, though the cost doesn't include money down the drain from let-run orders that were issued to city residents.

In other business the City Commission approved Jakes Excavating's bid of $13,950 to remove the earthen berm at the Pat O'Donnell Civic Center, on the north and south sides of the building.

Erickson said he has talked with the insurance provider of the building and the provider agreed to pay for the project if the cost was low enough.

Jakes Excavating originally bid $12,500, but asked to increase it to put rock along the side of the building and keep the run-off water away from the center.

The bid was substantially lower than another bid received by Angelo Luppino, Inc. and commissioners approved Jakes Excavating with a 4-1 vote. Commissioner David Sim voted against, questioning the additional work to install the rock without re-bidding for the project.

A third bid from Fahrner Excavating was received but did not meet specifications.

Construction at the center is expected to begin next week and to be completed by Nov. 10.

The City Commission also approved entering into a two-year agreement for custodial services at the Memorial Building with CSM Services, which also serves Gogebic Community College.

Erickson said the company provides services throughout much of Michigan but hires local individuals. He also said the contract can be cancelled or a change in employees can be made with a 30-day notice.

Sim asked why the contract was being presented at a special meeting, rather than a regular meeting, because the bids were just received Friday. City officials said the current custodian has given a notice of resignation two weeks ago and was willing to stay on to train the new employee, but wanted to leave the position soon.

The contract with CSM was approved by a 3-2 vote, with commissioners Sim and Joseph Cayer Jr. opposed.