GCC one of three in state with enrollment increase 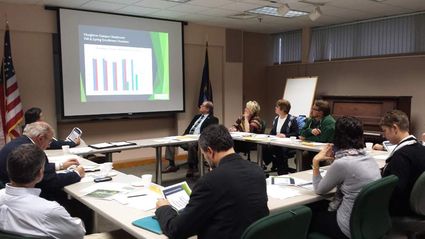 GOGEBIC COMMUNITY COLLEGE'S Board of Trustees heard an update from Miranda Lawver, assistant registrar and institutional researcher, at right, during the board's Tuesday meeting. GCC is one of only two Michigan community colleges to experience an increase in both enrollment and credits taken this year.

IRONWOOD - Gogebic Community College's Board of Trustees at its meeting Tuesday heard the college's enrollment has grown by about 2 percent from last year to 1,122, one of only three community colleges in Michigan to experience the upward trend.

"Gogebic is the only one up - actually Henry Ford (Community College) is too - up both in head counts and credits in the whole state of Michigan," Lawver said, mentioning Kellogg Community College saw an increase in enrollment, but a decrease in number of credits taken by students.

Part of GCC's growth comes from students in the Early College program, which allows high school juniors and seniors to take college courses that apply to an associate's degree if they attend GCC for a year after high school.

The Early College students make up part of GCC's off-campus enrollment, which has grown by 74 percent since fall of 2007 and currently makes up 26 percent of the college's total enrollment.

However, college officials also said its off-campus operations has grown by 4.3 percent in credits taken excluding the boost from Early College students, which account for 13.8 percent of GCC's total enrollment.

Last year was the first fall for GCC's program with Calumet the only school to participate. This year, the college added Lake-Linden, Dollar Bay and Hancock high schools.

Trustees also approved bid items for a project to be completed by students in the building trades/construction technology program.

GCC students will build a garage with above living quarters this year, and trustees approved Forslund Building Supply's bid of $29,727 to provide materials, Lindquist Electric's bid of $7,796 to do the electrical work, and M&M Plumbing to perform the plumbing and HVAC work with a bid of $14,700.

A total of seven bids were received, and all those approved were the lowest offers, with the exception of Steiger's ACE Home Center, which did not meet project specifications.

Trustees also approved the 2014-15 capital outlay list allowing purchases of a number of items at a total of $178,500.

The board also handled several personnel issues including accepting the retirement of Cheryl Bunt, effective Dec. 31.

Bunt has been employed with GCC for over 20 years in a variety of roles including positions in Financial Aid, the Lindquist Center, Dean of Instruction's office, ACES, TRiO, GCC Foundation and most recently in the Maintenance department.

"Although it was difficult to leave quite a few enjoyable positions over the years, I bounced back and learned something new with each opportunity," Bunt wrote in her resignation letter. "I will miss many of you as you really have been family to me."

Her most recent position will not be filled by the college because GCC contracts out for custodial and maintenance services.

The board also accepted the resignation of Nik Patrick, who accepted employment near Green Bay, Wis. Patrick had served in Admissions as the college's recruiter since July 2012.

Additionally, GCC's board approved the posting of a new position of marketing coordinator who will report to the Director of Admissions, Marketing and Community Engagement.

Officials said the marketing coordinator will allow GCC to carry out its new marketing strategy, focusing on social media and introducing the college's new brand, which is being developed with Interact Communications.

Board members also selected Nicole Rowe, of Ironwood, to serve as the director of Allied Health Programs at GCC.

Rowe started at GCC in 2008 as an adjunct faculty member teaching several courses within the Allied Health program, and has contributed to the freshmen orientation curriculum. Most recently, she's served as clinical coordinator and coordinator of the certified nursing assistant program, as well as the college's nurses aide evaluator.

The board approved beginning the search for Rowe's replacement as Allied Health Program Coordinator.