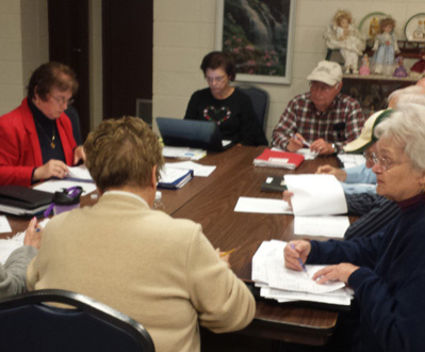 AGING UNIT of Iron County's Board of Directors held a meeting Wednesday to discuss its budget that it will present to the county. The unit will seek an additional $15,000 allocation to help provide employees wages, and a one-time request of $4,000 to pay off debt incurred from a new roof that was put on the Hurley Senior Center.

HURLEY - The Board of Directors for the Aging Unit of Iron County met Wednesday to discuss its budget and intend to give the unit's employees wage increases, if it gets a larger allocation from the county.

The Aging Unit's typical county allocation is $106,000. The unit will ask for an additional $15,000 for next year's budget, and a one time request of $4,000 for this year's budget to help pay off its debt for a new roof on the Hurley Senior Center.

The Aging Unit's budget proposal, which was approved with a 6-3 vote, provides $13,000 of the county allocation for hourly pay increases for employees, ranging from 25 cents to $1.

"I don't like the discrepancy between $1 versus 25 cents," Wahner said, adding that she supports raises for all employees but in a more equitable manner.

Roberts said the $1 raises may be too much all in one year, mentioning the highest wage increase the Iron County Board of Supervisors gave its employees in 2014 was 35 cents.

"The highest wage they're going to give next year is 25 cents," Roberts said, acknowledging the fact that Aging Unit was trying to compensate for the years employees didn't receive raises. "(But) you're asking taxpayers to catch up."

Roberts added that she didn't support the idea of giving a small raise to a couple people and a much larger increase to others, noting that the compensation for lost wage increases may be a little high.

Executive Director Mary Kay Welch said the raises will depend on whether the Aging Unit receives the higher allocation from the county.

The unit's budget included no additional rent funding for the Mercer Senior Center, which was requested at a previous board meeting to help with upcoming repairs.

However, Welch said she was aware of some grant funding that may be available for the the Mercer center that will be looked into.

"So basically, you want to ask for $15,000 more from the county," Roberts asked the other board members. "Mercer pays 46 percent of the taxes, so that's about $7,500 that Mercer taxpayers are going to be contributing to the tax bill, and the Mercer Senior Center doesn't get anything out of it."

Directors said the Mercer center doesn't belong to the Aging Unit. The Aging Unit pays rent to use the center as a meal site three days a week and purchases supplies and provides meals.

Hickey told the board that the Mercer site needs a company vehicle and a paid employee to deliver meals to seniors. The Hurley site has three vehicles and paid employees to make meal deliveries, whereas the Mercer service is offered on a volunteer basis.

At its meeting Tuesday, Iron County's Board of Supervisors discussed cutting funding to the Aging Unit because of the arguing between directors.

Joe Pinardi, Iron County board chair, had previously told the Aging Unit the county was considering giving the unit half of its funding at the beginning of the year and the other half later, if the arguing stopped.

The Aging Unit will present its budget proposal to the Iron County Finance Committee at its meeting Oct. 9.