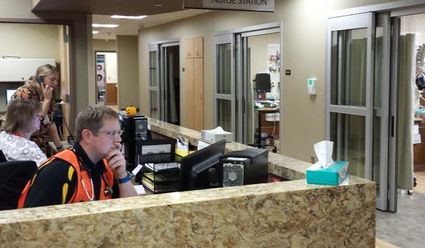 Officials said the project, which included relocating the hospital's lab and pharmacy, cost $4 million and completely changed the appearance and structure of the hospital's emergency care location.

"It's like working in a whole new place," said Brian Hughes, one of the full-time physicians in the department.

Hughes has been at AGVH for two years, but in the emergency medicine field for 15 years. He said he's seen how technology has changed over the years and that he's recognized how some of the ED's new technology improves the service.

"Like anything, initially, we were skeptical," he said. "We were like, 'Do we really need all this stuff to do a good job ... but it really does work."

Luke Wyzlic, a physician assistant in the ED, said the new department brings AGVH up to speed with many other hospitals.

"Especially now with the new electronic medical records system," he said. "That certainly streamlines everything because now we have access to their medical record with any hospital that runs the Epic system, and more than half of the hospitals in the country use it."

The glass doors close off each room to allow patients some quiet from the rest of the department, but also allow nurses to visibly monitor patients. The rooms also have a curtain that can be closed to give patients more privacy.

"Another benefit is that the rooms are set up exactly the same," Monville said, adding that a nurse can go into any room in the department and will find the same equipment in the same places.

The rooms have a new call system for patients to alert nurses to various needs, exam lights to better accommodate procedures and a new cardiac monitoring system to allow a wider range of tracking patients' vitals.

Paula Chermside, chief operating officer at AGVH, said the hospital's ability to provide emergency services will be enhanced because of the department's additions such as the private rooms and a redesigned triage process.

She also said the new emergency department provides for a more collaborative effort among staff, allowing emergency room providers and mid-level practice providers, like physician assistants, to work together on providing care.

"It's a very exciting time for Aspirus Grand View," Chermside said, "the fact that we've been able to really create a first-class emergency room from a physical perspective and also that we have an exceptional group of emergency room providers and staff right now."