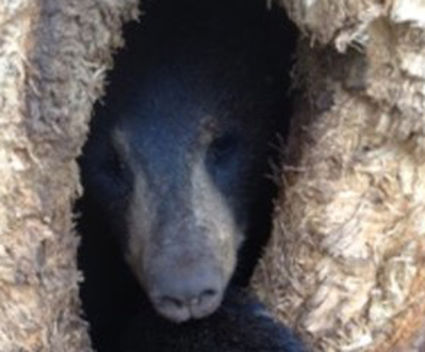 TWO SMALL black bears were rescued Sunday after they became stuck when debris collapsed on them in a tree in Polk County, Wis. The Department of Natural Resources responded and provided the photo.

Joanne Haas, of the DNR, said the cubs were rescued from a Polk County tree.

A woman reported hearing strange animal noises coming from the tree, and she saw a snout sticking out of a crack in the trunk on Saturday.

When the cubs were still stranded on Sunday, she called for help and the DNR responded.

The Polk County Sheriff's Department had been notified first, dispatching the wardens to the scene.

Then a wildlife rehabilitation expert in Polk County was called out.

It appeared as if the two cubs had been pinned in the tree when some debris fell down.

The Milltown Fire Department was then called to the scene and the cubs became curious, as one jammed its head out of the small hole in the trunk to keep watch on the wardens and firefighters.

"We cut a hole in the tree and then we all backed off and waited," Dorn said.

They didn't have to wait long, as the cubs quickly left their crowded lair. They ran into the woods, apparently seeking their mother.