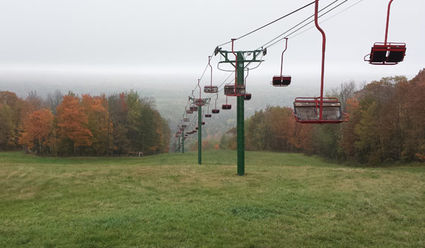 INDIANHEAD MOUNTAIN Resort is considering construction of a new 140-bed hotel with an adjoining casino in partnership with Lac Vieux Desert Band of Lake Superior Chippewa Indians. The site for the new facility is at the top of Indianhead Mountain, above.

WAKEFIELD TOWNSHIP - Plans for a new 140-bed hotel and adjoining casino are in the works for the top of the Indianhead Mountain Ski Resort in Wakefield Township.

Barry Bolich, manager of Indianhead and Blackjack Mountain ski resorts, and tribal leaders from the Lac Vieux Desert Band of Lake Superior Chippewa Indians gave a presentation to the township board and planning commission at a meeting in September.

"At this point, we've entered into and signed a letter of intent ... to pursue and study the feasibility of building a hotel and casino at the top of Indianhead Mountain," Bolich said. "It's very early in the process to say much more than that, ... and as we know more, we will share what we can."

Bolich said the intention is "to build a very high-end destination resort for the western U.P." that would be a "huge economic impact" on the area.

Because the ski hill is not tribal reservation land, LVD would need to secure a land trust to operate the casino, said John Cox, Wakefield Township supervisor.

"The hotel can be in township land, and that's what we're going to insist on because we want some tax revenue for it," Cox said.

LVD would need to purchase a parcel of land from Indianhead and would need approval from the federal government and Gov. Rick Snyder to build the casino.

"That land then becomes their land, the parcel that they buy from Indianhead, and it's considered tribal land," Cox said. "The hotel would be subject to regular property tax, but the casino wouldn't be."

Cox said the resort and casino could bring a couple hundred jobs to the area, as well as financial gains for various local organizations.

"There are certain things in that casino that the state of Michigan taxes and they take 2 percent of those profits, and they put it in a pot of money that the tribe can, or must, give the money to a 501c," within a 50-mile radius, Cox said.

From a governmental standpoint, having the resort would be a nice location to host conferences, Cox said, which typically require local officials to travel out of the western U.P. to Marquette, Escanaba or Houghton.

He added the resort could attract people in the summer, as well, making it a year-round destination.

"I see this personally as a win-win for everybody here," he said. "The area, just to keep these ski hills open, has to become a destination area."

Wakefield Township is sending letters to residents to gauge public opinion on the issue.

"We want to hear what people feel about this and make sure there's good support," Cox said. "The feedback, what I've been hearing so far, has been positive."

A public information meeting has been scheduled for 6 p.m. on Oct. 22 at Indianhead Mountain Sky Bar, the building just past the ticket booths at the top of the hill.

Those unable to attend the meeting are asked to send comments and concerns to [email protected], or Wakefield Township, P.O. Box 164, Wakefield, MI 49968.