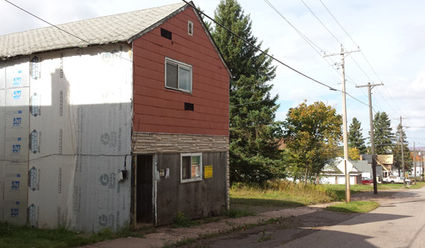 THIS BLIGHTED structure at 506 S. Moore St. in Bessemer will be removed with the help of a grant through the Michigan State Housing and Development Authority. Gogebic County and four other U.P. counties received the grant to help with removing 11 publicly-owned residential structures.

BESSEMER - The city of Bessemer is looking to remove a blighted structure at 506 S. Moore St., for which it would receive grant reimbursements from the Michigan State Housing and Development Authority.

Officials were notified in July that Gogebic County received the MSHDA Blight Elimination grant, along with four other Upper Peninsula counties: Alger, Delta, Houghton and Marquette.

The grant money, totaling $168,950, is to be used for elimination of 11 publicly-owned residential structures and requires a 25-percent local match of more than $42,000 from the five counties.

The three properties in Gogebic County include the blighted structure on Moore Street and two more in Ironwood at 108 East Houk St. and 323 East Pine St.

The county held a bid opening on Sept. 26 for demolition of the structures, but Bessemer City manager Mike Uskiewicz said no qualified bids were received for the Moore Street structure.

"I have made the county aware that the city would now be interested in doing the work since we are not competing against any local businesses," Uskiewicz said. "This would be a grant reimbursement for the work. With that said it should be a break even transaction on the clean up."

Uskiewicz said the work should be able to be completed without the city's financial contribution, which would save the city $3,500.

Blighted structures needed to meet several criteria under the grant such as being a publicly-owned residential structure, rather than commercial, and be located near a town or city.

Two additional blighted structures in the city of Bessemer were recently removed at 304 and 306 North Clayberg St., one of the major routes to the city's cemetery.

Uskiewicz said the elimination "will greatly enhance the neighborhood ... (and) the community entry way to that facility as well."

He also thanked the city's staff for their attention to the project and John Stemphiar for allowing the city to use his excavator.

In addition, Eagle Waste and Recycling, which provides waste removal services for the city, provided dumpsters and hauled the debris at a cost of tonnage only, saving the city "substantial dollars," Uskiewicz said.

"I also want to thank the partnership with the one property owner for working with us to have these dangerous facilities removed," he added. "Working together we can make a difference."