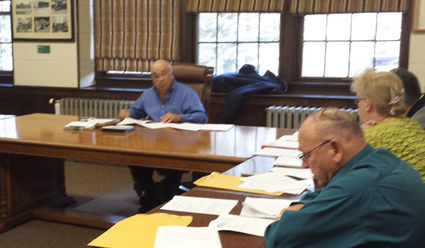 BESSEMER CITY COUNCIL members discuss the proposed hotel resort and casino at the top of Indianhead Mountain in Wakefield Township.

BESSEMER - Bessemer's City Council voiced its support for the proposed hotel resort and casino on top of Indianhead Mountain in Wakefield Township, citing potential job creation associated with the endeavor.

The plan for the 140-bed hotel and adjoining casino is a partnership between Indianhead/Blackjack Mountain officials and Lac Vieux Desert tribal leaders from Watersmeet.

"It certainly will create jobs in the area in the event that it should occur," council member Al Gaiss said, predicting more than 200 jobs. "This would be a boon, particularly with the mine 15 miles out of Wakefield and with Copper Peak, going to be peaking probably in 2016-17. That timeframe, I see a real plus for the area work-wise. Standards of living should go up, higher wages for many people, (and) lots of jobs that don't currently exist, if all this happens."

Council member Doug Olsen said beyond the jobs the resort and casino could create, there's an additional benefit for the area.

"The hotel that's associated with this, there's going to be a conference center, which lends the possibility of bringing in people into the area for meetings during the summer, not just for the winter," Olsen said.

The process is still in the early stages, but LVD would ultimately need to purchase land from Indianhead and get approval from the federal government and Gov. Rick Snyder to secure a land trust making the parcel tribal land.

Wakefield Township has scheduled a public meeting on the issue at 6 p.m. Oct. 22 at Indianhead Mountain Sky Bar.

Under Section 19 of the state's Emergency Management Act, eligible municipalities can be awarded up to $100,000 or 10 percent of their previous year's operating budgets, whichever is less.

The Section 19 funding cannot be used on projects already planned to be funded with Urgent Need grants, which comes from the Michigan Strategic Fund administered by the Michigan Economic Development Corporation.

If the city is officially awarded the monies, which includes $615,000 from the Urgent Need grant, it would make repairs to damaged infrastructure on Longyear, Colby and Sophie streets.

Four bids were received for the surplus equipment, and council accepted the highest bid of $15,000 from Gallegos Sanitation Inc., out of Colorado.

Nelson referenced Mayor Butch Semmerling's motion at a July council meeting that said the city would keep the truck for a year.

"You had made that motion and Doug supported it, and we were all in favor of holding on to the dump truck for one year," Nelson said to Semmerling.

"I changed my mind on that," Semmerling said. "I had talked to Neal (Nelson, of Bessemer's Department of Public Works) after that; he didn't feel it was really necessary to keep it for another year."

Council members then passed a motion to set aside the $15,000 from the garbage truck and dumpsters for an excavator the city is looking to purchase.

Nelson voted against the $15,000-earmark. At a previous council meeting Nelson said she had talked with DPW employees who told her the city didn't need the excavator.

The council also accepted Ron Jacobson's resignation from the city's planning commission. Jacobson is moving from the city to Ironwood Township.