Seniors view fall colors from the seat of an ORV 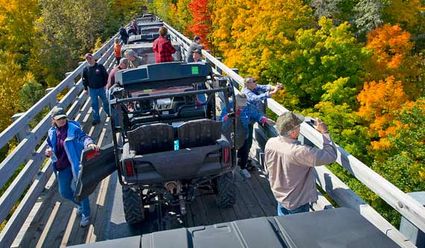 SENIOR FALL Color Tour participants stop to take in the view from the Firesteel River trestle bridge on the Bill Nicholls ORV route as part of a ride on Sept. 18, provided by volunteers with the Michigan Trails and Recreation Alliance of Land and the Environment. MI-TRALE has hosted the Ontonagon County ride for the past seven years.

According to a release from the Michigan Department of Natural Resources, nearly 100 senior citizens occupied the passenger seats of two-, four- and six-person side-by-side ORVs as the group traveled a 19-mile route from Greenland to Twin Lakes State Park.

The color ride is organized and provided entirely by volunteers with support from the Michigan Trails and Recreation Alliance of Land and the Environment (MI-TRALE), a western U.P. club that helps maintain an estimated 500 miles of trails in five counties.

"We take about 100 seniors on the ORV tour each year; 50 participants go one way in the morning, the other 50 take the return trip in the afternoon," said Don Helsel, president of MI-TRALE. "We'll get calls, starting already tomorrow, about next year's ride."

The trip takes about 90 minutes and covers a variety of terrain through hardwood forests and over three trestles that span river gorges.

The ride is always held the third Thursday of September and this year it coincided with Michigan Trails Week, which encourages use of the more than 12,000 miles of hiking, biking, equine and motorized trails in the state.

According to the MDNR release, the increasing popularity of the side-by-side ORVs has allowed more seniors to hit the off-road trails.

John Turpeinin, who drove his vehicle during the event for the second year in a row, claimed to be the oldest participant at 85.

"I love it," he said. "I had a quad for years but I moved up to a side-by-side. It's easier getting into that machine than throwing my leg over the side."

With the intent to attract more riders, Steve Kubisiak, the MDNR's ORV program manager, said the state has recently approved a new 28-mile ORV route in the U.P. and a 38-mile expansion of trails in the northern lower peninsula that will connect six communities.

The MDNR also provided $2.7 million in grants to local ORV clubs and organizations for trail improvement and restoration.

"The grants and additional miles of trails have been made possible thanks to a recent increase in ORV license fees, including the addition of a new $10 ORV trail permit," Kubisiak said. "These changes are expected to raise $6.1 million in new revenue for the trail system on an annual basis, which will allow us to keep making the improvements our customers are asking for."

"We maintain 250 miles of DNR-designated trails," Helsel said. "We use the grant money mostly for signage; much of the other work is done and paid for by volunteers."

Volunteers and donations are also key to the success of the annual senior ride.

Local retailers donated vehicles to make sure there were enough to handle the crowd, and two emergency medical technicians accompanied the riders on the transfer bus (provided by Ewen-Trout Creek schools) and on the trail "just in case," Helsel said.

According to the release, Krupp's Mini Market at Twin Lakes donated 200 pasties to provide lunch for the participants and Rich Pirhonen, a park ranger at Twin Lakes State Park, enlisted his wife to bake enough cookies so everyone had dessert.

"This is the park's biggest event in the fall," Pirhonen said. "We have wonderful weather this time of year and the colors are perfect. This is a great thing for the seniors."

Twin Lakes State Park is one of only four such parks in Michigan where visitors are allowed to take ORVs to get from parking areas or campsites to trailheads, making easy trail accessibility for ORVs.

Also providing assistance with the event were the MDNR and the U.S. Forest Service.

Kim Sims, of MI-TRALE, organized the event for the second time, after helping out for the previous five years.

"It takes a lot of coordinating between the communities and agencies to get it done," she said, "but the appreciation we hear from the participants makes it all worth it."

To learn more about riding ORVs in Michigan, visit michigan.gov/orvtrails.