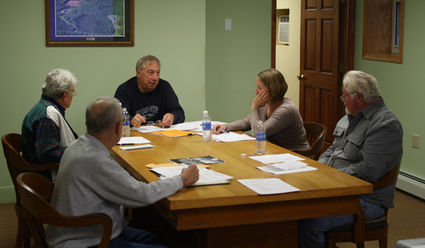 WAKEFIELD TOWNSHIP - Due to a decrease in taxable property value Wakefield Township residents will get a slight tax break for 2014's tax year.

The Wakefield Township Board approved a new millage rate at its meeting Tuesday, which is slightly lower than 2013's rate and will generate roughly $27,000 less in township revenue.

The total taxable value dropped from about $31.1 million to $25.5 million, due largely to changes with Great Lakes Gas Transmission Company, which transports natural gas through much of Michigan.

"This year the state of Michigan gave Great Lakes Gas a reduction of their pipelines," said Melissa Prisbe, the township's assessor. "We had a huge reduction because we are the ones who carry the major value in this county, so our taxable value dropped a lot just from Great Lakes Gas."

Officials said the gas company had about two-thirds reduction in its taxable value.

Cox said the township has one of the lowest rate of actual dollars residents pay in the county.

There was an increase in about $195,000 of taxable value the township added to its tax roll through the state's Consumer Price Index, as well as new improvements in the township.

The township also posted a link to a property tax estimator on its website and encouraged residents to use the link to view their property taxes.

Board members also stated their opinions on the 140-bed hotel resort and adjoining casino being proposed for the top of Indianhead Mountain.

The proposal is a partnership between tribal leaders of the Lac Vieux Desert Band of Lake Superior Chippewa Indians and Indianhead Mountain officials.

"It looks like we may be meeting with the governor's representatives in the middle of the month here," Cox said, to discuss the proposal with state officials.

Tribal leaders would need both federal and Gov. Rick Snyder's approval to secure a land trust allowing the construction of the casino at the top of Indianhead.

Cox also said he was pleased the Bessemer City Council voiced their unanimous support of the project at its meeting Monday.

The board also briefly discussed the township's zoning on Indianhead Mountain.

"The attorney asked me what kind of zoning we have up there right now, and I said, 'Well Indianhead was built when I was a kid and there was no such thing as zoning,'" Cox said. "So really it's considered residential up there, it's not a commercial area at all."

Cox said the township would likely rezone the area if the proposal moves forward.

"We'll get through that," he said. "There's stuff in our ordinance that allows that, even in a residential, so we can move through that."

Joan Dalman, township treasurer, said she was in favor of the hotel, but not for the casino.

"I just believe in the long run it will do more harm than good," she said. "I look at the Bible as a code for life and it says that the hasting after riches leads to poverty, so I see gambling as that."

Dalman said she had a former banker friend who told her when gambling comes into a community the money tends to flow toward that and away from local businesses, and there can be additional problems, such as increased mortgage defaults. She suggested consulting with bankers and others on the potential issues.

Cox said he viewed the casino as a supplement to the hotel, as opposed to the casino being the main attraction.

"If we were business rich in this area, I guess I would say 'Not needed,' but Indianhead is struggling up there to survive and so are the other two in the area," he said. "That's what I base my decision on. I'm not a gambler and I don't think there's anybody on this board that is, and most folks aren't."

Cox also mentioned gambling can be done in a number of local places, as well as on the Internet.

Mandy Lake, township clerk, said she viewed the hotel/casino as a good thing, but worried about future friction between tribal leaders and the possible Copperwood mining project.

"Because we put so much toward that already, it's always still a maybe, but something like that would help provide more jobs for people in our area ... I'm just afraid of some friction in the long run," she said.

Board member Jim Spencer said: "I see it being a good thing, not only for the community, but especially for constituents in the township."

He said the revenue generated from the Indianhead resort could also help improve the township's roads.

"I'm looking at jobs," said board member Delmar Smith. "It would be nice to have jobs and then the people would be able to pay the rent."