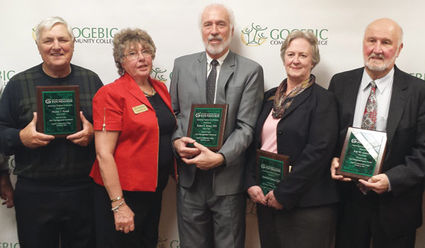 IRONWOOD - Gogebic Community College Foundation honored three individuals and one organization for their contributions to the college and commitment to the community at its 19th annual "Celebration of Achievements" banquet Thursday.

Roy Contratto was also honored as 2014's distinguished faculty member, and the Ironwood Kiwanis Club was awarded Honorary Friends of the College at the banquet in the Lindquist Student Center.

Baima, a Hurley native and 1971 GCC graduate, was honored for his contributions to the field of dentistry in both the private and academic sectors.

"This is really special for me because it's from home," he said, mentioning a number of friends and family members in the audience.

Baima has held a number of academic appointments with universities across the country and has peer-reviewed several academic articles published in scholarly journals.

In addition, he has given more than 250 academic lectures and one life lecture about his experience as a hostage during Iraq's occupation of Kuwait.

He has also been friends with GCC board chair John Lupino. Baima said he and Lupino used to play the card game Smear during their days at GCC, and Baima is still keeping score.

Baima thanked the late David Lindquist, who held a number of positions at GCC over the years and helped him while at the college.

"Somebody once said that a person is fortunate to have one truly good friend in life and I can't begin to tell you how wonderful it is to have the friends that I have and my family," he said.

Walter Prosek's nephews, Art and Jerry, accepted the award on his behalf.

"He spoke very highly of his years at GCC," Art said. "He felt that his professors and the staff were very good to him and gave him a quality education."

Walter Prosek, also from Hurley, graduated from Gogebic Junior College in 1940 and went on to the University of Michigan, where he earned a bachelor of science in engineering.

He held a number of positions with Allis-Chalmers Manufacturing Company, Hydrocarbon Research and California Oil Company, now known as Chevron, where he worked until retiring in 1982 after 32 years.

Walter Prosek has also been active in education and established the Walter F. Prosek Scholarship at GCC, awarded each year to two qualifying Hurley school graduates. The scholarship offers $1,000 from Prosek and the Chevron Humankind Matching Gift Program.

"He had a joyful outlook on life," Art continued. "Just like his comment, 'I started out with nothing and still have most of that left.'"

Walter Prosek married his wife, Edith, in 1948, and together they have raised three children, Earl, Jon and Marilen. He is retired in Florida and recently celebrated his 95th birthday.

Lorenson said hundreds of students have been helped by Contratto because of his "willingness to go the extra mile to help his students succeed."

Contratto, born in Wakefield and a lifelong resident of Bessemer, graduated from A.D. Johnston, then went on to work throughout northern Wisconsin as assistant manager for Thorp Finance Corp. for several years, until becoming a Bessemer city police officer in 1965, where he worked for three years.

During that time, he attended GCC and received an associate of business degree, then furthered his education at Northern Michigan University, earning both bachelor's and master's degrees in education.

Contratto said he recently walked through the hallway featuring the GCC Foundation's honorees in the Lindquist Student Center and saw a lot of his old instructors and colleagues.

"But I also saw a lot of people there, I have to admit to you, who were really my role models and mentors," he said. "It actually became a really humbling experience to realize that I was going to be honored also."

He and his wife established and operated one of the first self-service gas station convenience stores in the area, the Country Corner, on U.S. 2, near the Ramsay crossing, which served as a place of part-time employment and training for GCC students until closing in 1999.

He held several positions with GCC committees and facilitated numerous seminars and presentations until retiring from the college in 2000.

Contratto is also a former member of the Gogebic County Mental Health Committee and the Gogebic County Brownfield Redevelopment Authority, and helped establish an adult activity center and a group home in Wakefield for disabled individuals.

Contratto thanked Lindquist for his friendliness and help, both during his time as a student and as a faculty member. "He was always there to help us, and make things easier for us," Contratto said. "This is a tremendous individual award, but it's really not an individual award. It's really all those people along the way who helped me get this. And to all those people, the Foundation and everything, I thank them."

Sue Murphy, president of the Ironwood Kiwanis Club, accepted the award of Honorary Friends of the College on behalf of the club.

"Every organization that works with kids, we support. Right on up to scholarships for Gogebic Community College students," she said. "And this has been going on for 89 years."

The club has sponsored or assisted in a number of local projects, including providing students scholarships, the Ironwood Depot Park project, the Norrie Park pavilion and various youth sports activities.

The club's major fundraisers for the Kiwanis Club are Pancake Day, Peanut Day and the holiday Nut Sales, which raise money to support the local projects.

Lorenson thanked the Foundation and the many supporters for their commitment to GCC and its students.

"Over 70 percent of our students require some form of financial aid," he said. "Your help with the Foundation have provided the students with many opportunities they may not have had."