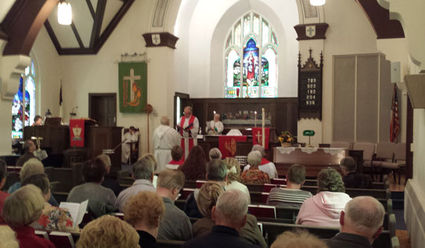 BISHOP TOM SKRENES, standing in white and red, installs the Rev. Bill Jacobson as pastor of Sharon Lutheran Church in Bessemer during Sunday's service. The congregation celebrated 125 years with a catered brunch following the service.

BESSEMER - The pews were full Sunday morning at Sharon Lutheran Church in Bessemer as the congregation celebrated 125 years of existence with a service and a catered brunch, and also officially installed its new pastor, the Rev. Bill Jacobson.

Jacobson has been presiding over the All Saints Lutheran Church in Wakefield for several years and has held sermons at Sharon Lutheran since June 1.

He said the church held an official installation Sunday because Bishop Tom Skrenes, of the Northern Great Lakes Synod, based in Marquette, was in town to celebrate the church's 125-year past.

Skrenes gave the Sunday sermon, before officially hosting the installation ceremony, and said the congregates were there to recognize two important matters.

"First, that this place, Sharon congregation, has endured, survived, thrived for 125 years," he said, asking congregates to think of all those in the past who have been through the church for baptisms, marriages and to simply find their faith.

"May also we recognize, in this more informal way, the beginning of Pastor Bill Jacobson's ministry in this place as the shared ministry agreement between All Saints in Wakefield and Sharon Bessemer now comes to this moment."

All Saints and Sharon Lutheran churches entered into a shared agreement this year with a new adopted logo of PSALM, Pastor Shared And Lay Ministry.

Sharon Lutheran began with the congregation of Scandinavian immigrants and formal organization in 1889, with it officially being incorporated on June 4, 1890.

The original church building was erected at 109 E. Sellar St. and was later sold in 1928 to a group of Finnish Lutherans and became known as St. Paul's Lutheran Church.

The present church building was built that year under the leadership of the Rev. F.E.W. Kastman, who retired in 1951.

The catered brunch following Sunday's sermon was held in the hall next to the church named in his honor.

Over the years Sharon Lutheran has consolidated with St. Paul's and, most recently, All Saints.

Jacobson said it was exciting to have "both congregations coming together and moving forward," he said. "To have a gathering such as this, the ministry that we've already begun to do together, there's just all kinds of things happening and I'm excited to be a part of that."

He said the church can no longer solely rely on what it has done over the past 125 years, and needs to "explore the new normal" for religion in the modern era.

"We're in a very different time for our world and the church is trying to sort it out and find out what that all means," he said, adding that the two congregations came "together to share resources and ministry opportunities."