By RYAN JARVI and KELSEY HANSEN 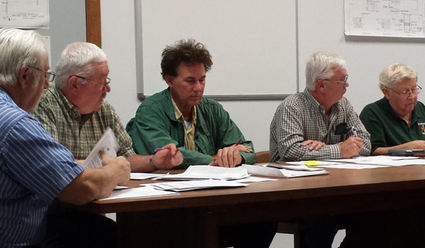 WAKEFIELD CITY Council members, from left, Joe DelFavero, Richard Bolen, Bob Blaskowski, Les Schneck and Ted Finco discuss the new employee health care plan at the council meeting Monday. The plan provides employees with the same benefits as the former plan and is expected to save the city money in the long run.

WAKEFIELD - The Wakefield City Council terminated several contracts during its meeting Monday in order to help in the purchase of Father Daniel Hall as the new city hall building.

The Western U.P. Substance Abuse Service Agency contract, the city's Employee Assistance Program (EAP), was up for renewal. After tabling the discussion at a previous meeting, the motion was carried to terminate the contract since the city is not legally obligated to carry an EAP, rather it is required to inform its employees of EAPs available.

City Manager Margot Rusinek said the service is essentially a "fail-safe" that allows employees to seek help for various issues, such as depression or substance abuse, that are already covered under the Affordable Care Act and provided for in the city's health plan offering.

"My opinion on this is it's a benefit, and of course we want to provide as many benefits as possible, but going forward with the purchase of Father Daniel Hall, we'll need to get serious about cutting the things that are absolutely necessary to come up with that money," Rusinek said.

A second contract terminated was for blight services provided by a code enforcement officer.

The duties and responsibilities of the position are being transferred to Rusinek's office.

The city had budgeted about $3,500 to pay for services performed by Jason Alonen, code enforcement officer for the city of Ironwood.

"Our code enforcement officer contract, often we don't spend what we've allocated, and this is just another place to look for a little bit of money to help us out," Rusinek said. "This is no reflection on Mr. Alonen or the value of the service."

The council also agreed to discontinue participation with the Gogebic-Ontonagon Community Action Agency until the agency can sufficiently provide the city with detailed information, including an action plan and the qualifications of a new hire.

Rusinek said she asked Kerri Duff, GOCAA director, for a followup plan and said the city has had concerns with services they were getting for the money they had paid.

"I was assured a new person would be hired," Rusinek said. "There's no assurance of hours. Velda was working 30 hours and the director said the other person may have a variation of hours; I also didn't get a plan."

In July, the council approved a contract for services for $1,200, which covered services for the 2013-14 fiscal year.

Officials did not mention what concerns the city had regarding services it received.

"We need to see some sort of commitment as to community development," council member Bob Blaskowski said.

At the Sept. 22 meeting, the council named Jennifer Michelin, of Employee Benefits Agency, to serve as the city's health care broker. She presented the chosen plan to city employees last week, and during that proposal, the new plan proved to meet the "substantially equal to or better" standard set by the bargaining unit contract.

The council approved the plan during Monday's meeting.

"We moved to a different plan in order to maintain the level of service and benefits for the employees at the same level they have now," Rusinek said. "It was not affordable under Blue Cross to do so, so that was the whole purpose."

Rusinek said she had several recommendations from other municipalities to move to Employee Benefits Agency, "and to use this strategy going forward," she said. "There are communities that have been saving money for years with this higher deductible plan."

Under the current contract with employees, the city will continue to pay deductibles as it has before. However, when the contract reopens next year for negotiations it may be up for discussion, Rusinek said.

In other business, the council:

-Approved moving forward with seeking reimbursements from the State Emergency Contingency Fund, provided under Section 19 of the Emergency Management Act, for repairs made as a result of Deep Freeze damages.

Under the law, eligible communities are able to seek up to $100,000, or 10 percent of their previous year's operating budget, whichever is less.

-Held discussion on changing the meeting times to 5 p.m. for the winter months, but council members voted to keep it at 5:30 p.m.

-Approved the location of the community fire pit at Eddy Park, to be situated to the west of John C. Siira pavilion.