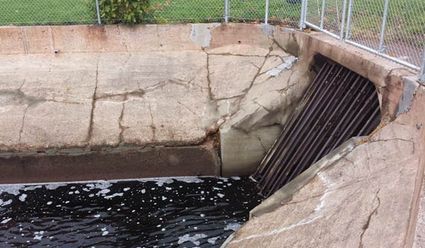 WAKEFIELD CITY council members decided Monday to table proposed repairs for the spillway at Sunday Lake and contact a state inspector to take a closer look. Council members worried there may be further damage to the structure beneath its concrete surface that could lead to more costly repairs in the future, if not addressed properly.

Employees from the city's department of public works lowered the level of Sunday Lake in late September and determined the spillway was in need of concrete and rebar reconstruction. The estimated cost of materials was about $1,500 and city officials said the work could have been completed by city employees in three days.

"I think we need some non-destructive examination of the spillway area," he said, "some simple things like tapping the concrete with a hammer, to something technical like ultrasound, to find out what's going on not only on the surface but also underneath."

Blaskowski said he was afraid of possible erosion beneath the concrete surface and didn't think putting on a "superficial patch" for $1,500 would be worth it "for something that could potentially lead to something catastrophic."

Council member Joe DelFavero said the city had trouble a few years ago with the culvert under M-28 that caused a road on the east side of the highway to sink.

"And they went in and did some comprehensive work and corrected the problem," he said. "As far as that section of the spillway, I don't believe, needs to be (further) inspected. MDOT (Michigan Department of Transportation) did that."

DelFavero said if Blaskowski was talking about replacing the entire spillway, there was no way the city could afford that.

"That would be a half-million dollar job," he said.

Blaskowski said in the worst case scenario, the entire spillway could need to be replaced.

"There's some pretty nasty looking cracks going on over there from what I've seen, and all I've done on it is a visual (inspection)," he said. "If you do research on spillways, they don't last forever. I think it warrants a more comprehensive inspection than just a visual, that's my point."

Because of the spillway's location and the outlet running under a highway, Blaskowski questioned how the city became sole owners of the dam and whether the state should have any involvement in repairs.

Former city manager John Siira said ownership of the spillway was brought up in 2001 when the city used state grant money for repairs on flood damages.

"We tried to say the state should own it because it goes under the highway," he said. "Because one edge of the weir is in MDOT right-of-way, the other end is in the park; because of the side that's in the park, we became the owner."

Siira said the city is required every five years to have the spillway inspected and has had a certified dam inspector with the Michigan Department of Natural Resources look at it.

"The weir itself was in good shape," he said of the last inspection, which occurred two or three years ago. "The walls, when we started doing the project, there was a lot of void behind, but most of those have been filled."

He said the city complied with every needed repair noted by the inspector, except for the spillway's floor.

"The floor has been an issue for a number of years," Siira said. "Nothing that's there now is new. It was just that we ran out of money when we did it."

Blaskowski said he wanted to compare the report and any pictures from the last inspection with the current condition of the spillway.

"I'm seeing some gaping holes in there and imagining the power of freezing water and water getting in," he said, mentioning last winter's frigid temperatures.

DelFavero said Blaskowski's concern was valid, but didn't think the water would freeze because it's constantly moving, but Blaskowski said he was more concerned of open pockets behind the concrete surface that could collect water.

Council member Richard Bolen said, "It's certainly to the state's benefit to ensure that we don't lose the dam," and supported contacting the state inspector for a closer look.

DelFavero made the motion to contact the state inspector and lower the lake for a closer look, and the council approved unanimously.