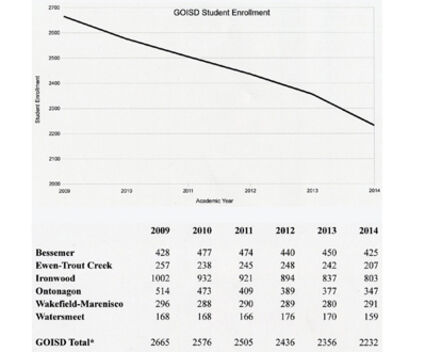 Of the six schools within the Gogebic-Ontonagon Intermediate School District, just one has seen an increase in this year's enrollment from last year.

Excluding the few students who are counted as part of a separate district formed within the ISD, the six other GOISD schools have seen a drop of 433 total students-or a decrease of more than 16 percent-from 2009 to 2014, according to data provided by the GOISD and mischooldata.org.

The district is up 11 students from 2013, and it's the only GOISD school to see an increase from last year's student count.

As enrollment for many schools goes down, so does the amount of funding they get.

Schools rely partly on foundational dollars, which are directly tied to students, as part of their revenues, said Bruce Mayle, GOISD superintendent.

"Schools will need to look at how they currently function in all areas as a review to minimize expenditures to coordinate the loss of revenue," he said.

Kangas said the audited numbers can vary from preliminary fall counts based on the number of part-time students, shared students and whether each student was correctly counted.

"In other words, a school's physical numbers may indicate that the school has 400 students, but in actuality, the school may only be receiving funding for 392.8 of those students, due to the classification of the students themselves," she said.

Of the six GOISD schools, Ontonagon has been hit hardest with dropping enrollment.

The district has entered each school year since 2009 with fewer students and has lost the largest percentage of its student body over that timeframe. The district has seen a drop of nearly 32.5 percent over the last six years, from 514 in 2009, to 347 in 2014.

Ewen-Trout Creek has seen some fluctuating enrollment numbers as well, but 2014's fall count of 207 is significantly lower than the previous years' student populations, which averaged 246 students. The previous low enrollment was 238 in 2010.

Watersmeet has faired well, though this year's count-of 159 students-is significantly lower than previous years, as well.

"Schools of choice opportunities have been more competitive between districts," Mayle said, which would provide the foundational revenue for the school those students choose.

However, as populations in both Gogebic and Ontonagon counties have been dropping, there are fewer students from the area to attract.

Mayle said in order to offset the downward trends of school enrollments, the area's population needs to improve, and one possible path is through job creation.

"With new jobs potentially come families and enrollment increases," he said. "If we do nothing the future is bleak. If we maximize our resources and create new jobs we can look to a brighter future."