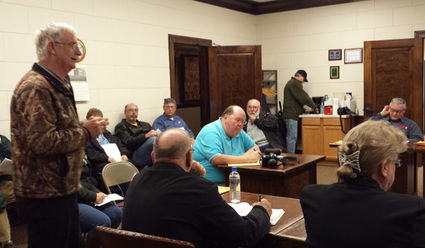 JIM LOEPER, Gogebic County emergency management and 911 coordinator, gave a presentation to the Bessemer City Council during its meeting Monday. Gogebic County voters are asked to renew a 911 surcharge on the Nov. 4 ballot to fund the county's emergency telephone call answering and dispatch services, as well as facilities, equipment and operations.

BESSEMER - The Bessemer City Council heard a presentation at its meeting Monday from Jim Loeper, Gogebic County emergency management and 911 coordinator, regarding the countywide 911 operating surcharge proposal on the Nov. 4 election ballot.

The current surcharge millage expires June 2015 and voters are asked for the renewal, which is not to exceed $1.65, on the monthly billings of landline, wireless and VOIP service suppliers within the county.

Loeper said the county can levy up to $1.65 per phone device within the county, but the charge has been kept at $1, which is set every year by the county board with the recommendation of a 911 committee.

The funds are used exclusively for the county's 911 emergency facilities, equipment and operations, as well as the dispatch center, which is based in Crystal Falls.

"Basically we take care of all communications within Gogebic County," Loeper said. "So, if a radio breaks down, we get it fixed. If a fire department needs radios, we look at radios for them."

Loeper said in the past the surcharge has also funded updates to the county's communication towers and backup generators for local transmitters.

Mayor Butch Semmerling asked if the dispatch center would ever be relocated back to Gogebic County. Prior to using the center in Crystal Falls, the county used one based in Negaunee.

"It's better now than when it was in Negaunee, but it was the best when Gogebic County had it," Semmerling said.

Loeper agreed because there would be "hometown people" staffed at the center who know more local streets and areas than dispatch employees in Crystal Falls might, but said he wasn't sure if the county could afford relocating the center.

"It's a big startup cost because of the equipment that we have to have, and the technology, and as you know the biggest cost in running that center, is the personnel," he said. "I'm sure this will come before the (911) committee again, and if there's a way we can bring it back to the county, I'm sure we will certainly look at that."

"I want to make sure that we keep up with the times," Loeper said, mentioning the current radios being used by responders may need replacing soon, as they are no longer being made.

Loeper said the U.P.'s 911 authority, which is made up of a number of U.P. counties, worked with private partners to develop a own system that keeps 911 calls in the U.P., rather than being rerouted to a downstate call center.

"We are the first counties in the state of Michigan, in the Midwest, that has their own 911 routing system," he said.

Previously, calls would be routed downstate by fiber transmission wires, then sent back to the proper dispatch center.

Loeper said several years ago someone cut the fiber wire causing the county to lose 911 services for about 36 hours.

"Now, working with our partners, we have redundancy," he said. "We have two routers in the U.P. that covers everything. ... No one in the state has done that, and we've done that in the U.P."