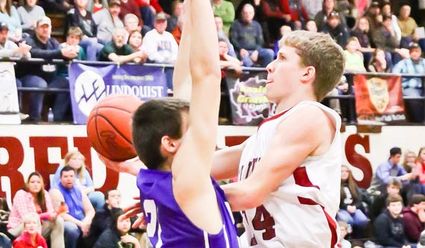 Ironwood edged the Oredockers 57-52 in a game that featured 15 lead changes and five ties in front of a large, energetic crowd.

"We needed a game like this," Ironwood coach Pete Lewinski said. "We needed to get pushed. Ashland, they're 1-4, but they play the big Duluth and Superior schools. They're in the Lake Superior Conference, so 1-4 is misleading, they have some talent. They pushed us. It was nice getting a win in a tight game, holding our poise. We knocked down our free throws. I believe we were 9 of 10 in the second half, so our free throw shooting was clutch.

Ashland's John Sechen was as good as advertised, leading all scorers with 24 points. But Ironwood's Colin Clausen was just as good, leading Ironwood with 19 points, hitting three 3-pointers and attacking the basket.

"I thought Colin had an awesome game, one of his best of the year, but Colin has been doing that this year," Lewinski said. "Colin is becoming a double threat for us. He's very athletic. Colin worked on his game in the off-season, like most of these guys did. He's a double threat. He knocked down the 3, but taking it to the hole in traffic and his athleticism, the way he throws up those shots and makes them, outstanding."

Clausen scored 14 points in the first half, including 10 in the second quarter. Jacob DiGiorgio was out with two fouls for all but the last two minutes of the quarter, but Clausen helped Ironwood outscore Ashland 19-9 in the period.

"Jake's a key player in our group, but we're a good team, we know each other really well, we've been playing since grade school. It's just been a really good time coming together, playing as a team," Clausen said.

It was Sechen's turn to shine in the third quarter when he scored the first seven points of the half to pull Ashland within 29-28.

"Sechen, what a tremendous player he is," Lewinski said. "He's a double threat. he can knock down that 3. He's probably more effective on the drive. When Sechen drives, he'll jump up above everybody and he elevates very high. I thought we defended him well. He had 24 points, but I thought we made him work. He's a great ballplayer."

Ironwood, though, stemmed the tide and went into the fourth quarter with a 41-39 lead. But Ashland again got the jump on the Red Devils, taking a 47-41 lead three minutes into the quarter.

Clausen came up big again, hitting a 3 and attacking the basket yet again to pull Ironwood within 47-46.

The teams then traded the lead five more times in the final two minutes.

Sechen drove the baseline to give Ashland the lead, 50-49.

Sharrow went to the basket to put Ironwood back in front, 51-50.

A putback by Brendan Carter put Ashland ahead 52-51.

Jared Sobolewski got to the free throw line and made both with 56.9 seconds. That gave Ironwood a 53-52 lead and it didn't lose it this time.

Ashland had an inbounds play underneath the basket and the Oredockers got it to Sechen, but his shot wasn't close.

With Ashland forced to foul, DiGiorgio hit two free throws in the single bonus for a 55-52 lead.

Lewinski was a happy coach afterwards.

"I thought Matt Dary came on strong, good rebounding, clutch free throws," Lewinski said. "Sobolewski doesn't get the big stats, but he'll get a board, he'll help on D and get a stop and get a nice assist to Jake. Jake is Jake, you know what you're doing to get from Jake."

Denver Sharrow had 13 points for Ironwood and DiGiorgio ended up with 12 points and 12 boards.

"Denver, our leading scorer so far, had a little trouble on the perimeter, but we told him to take the ball to the hole to open that up," Lewinski said. "I thought he scored well taking the ball to the hole. I thought Luke Hewitt played very well off the bench; he gave us good minutes running the paint."