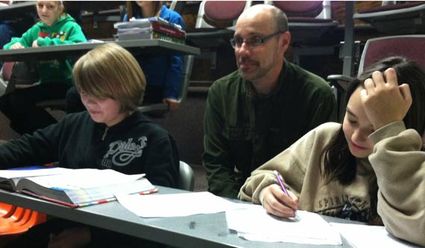 IRONWOOD - After seeing success in reading and math scores at the elementary level, teachers in the middle and high school level in the Ironwood Area School District decided to incorporate similar programs to enhance student learning experiences in the classroom.

With the help of Accelerated Math and Accelerated Reading 360, through Renaissance Learning, teachers have been able to individually assess students ability levels through testing.

What separates the programs from other assessment-based testing is a student's progress can be checked throughout the year, versus one yearly assessment, like one given through the state standardized testing.

According to middle/high school principal Michelle Kanipes, the programs were successful in the elementary classrooms in the district, helping to reinforce grade-level learning.

"In elementary, you generally have formal assessments given to kids to get their basic skills at that level before they move up to middle or high school," Kanipes said. "And what we noticed through Norrie being a Focus School seven years ago, and (Luther L. Wright) being a Focus School now, we needed to do some interventions at the middle/high school level, which aren't typically done in most schools."

As for the teachers, the math program was introduced last year in grades seven though nine. After seeing success, the program was expanded up to 12th grade.

"The discovery was that there are still kids not performing at a mathematical grade level," Kanipes said. "So, what can we do in response to this? The math department two years ago said, 'We will buy into this 100 percent.' We have committed to getting the licensing and to pay for the programming, so it's a monetary commitment by the district and the commitment was if we are going to do this, we are going to have to do this with fidelity and transparency and we have to do this with 100 percent commitment by everybody."

For the math instructors, seeing the progress has been "amazing."

"The growth has been amazing. To see the kids from the beginning of the year, until now is just leaps and bounds," Title 1 instructor Tim Routheaux said.

With the math program, students are given additional work packets, based on their individual skill levels. Math instructor Kevin Lyons said some kids saw the packets as just "more math homework," but other kids "took it and ran."

"They realize now that even if their regular math homework is done, there is always more math to work on," Lyons said. " ... If they are behind, it's there for them to catch up. If they are at grade level, it's reinforcing what is being taught in the classroom. It's also enriching them, by giving them things they might not normally see."

This year, the district committed to using the Accelerated Reading 360 program in all the English classrooms after it has been utilized in elementary classrooms in the past.

"There has been the thought that children in pre-kindergarten through third grade are being taught how to read," Kanipes said. "They are learning the five basic principles of reading, and by fourth grade, they should now be able to read-to-learn. They are getting thicker text books, getting them ready for middle school, high school and eventually college or the workforce ... We have learned that some kids in middle and high school were not reading to their level, so we committed to this program."

Kanipes said the change has made teachers change how they teach in the classroom.

"It has been a major paradigm shift for us, because generally in middle/high school, you're an English teacher. You're working on grammar, writing, reading literature, so you are not doing the fundamental skills that would be done at the elementary level. That has changed."

"If I know a student finishes an assignment early, and if their AR score isn't where it should be, they can spend those extra few minutes reading," she said. "All those extra minutes add up, and it does make a difference."

According to Maki, she showed data of one student to other teachers, to show the progression over the course of last year. Maki said the eighth grade student took the assessment test in November and scored a 7.8, a little behind where they should have scored a 8.0.

"The student was a good student, and worked really hard," Maki said. "In February, they took it again, and they scored an 8.4, kind of where they student should be. However, they started taking it super serious and started checking out two books a week during our weekly trip to the library. At the end of the year, the student took the test again in May and scored at a 12th-grade level.

"The results are real and can make a difference in a couple of months."

Within the English classrooms, students are given books based on their reading abilities. Maki said her high school students chose one non-fiction, one fiction, one autobiography and one genre of choice to read throughout the year.

"Of course, reading isn't everybody's favorite, but the way AR works is each student has a goal that they need to get to," she said. "By reading these books and taking the tests that go with the books, they earn the points towards goal. They know that if they read that book and pass the test, they will get those points, so it is a motivator for them."

Kanipes said she and other teachers have noticed the increase in reading throughout the school.

"We're seeing more and more kids walking around the school with books," Kanipes said. "The kids are actually reading, and other teachers have commented on it, about how kids are reading during free times in their classrooms. ... If you are being tested and showed your skill level, then steered towards books that are within your reading level, you're probably more apt to read, because you're understanding it and probably enjoying it more."

Maki said seeing her students not only discussing books, but recommending them has been "a neat experience."

"The cool thing is they have started recommending books to each other," she said. "Hearing the students discuss a book that they have read and then recommend it to a friend has been neat."

The goal in the future is to expand the AR 360 and AM Math programs into other classrooms as well, including chemistry and physics.

Progress has already been seen in other classrooms because of the programs.

"This has been a great piece of data for our staff, because we have never looked at data in this way before," Kanipes said. "With these two programs, it has given them the opportunity to adjust their teaching methodology as to what is going on in their classrooms. They are better able to differentiate because they know what levels their students are at.

"Subsequently, it also benefits social studies, science, or other elective classes, because they certainly read and write, or do math in those classes as well."