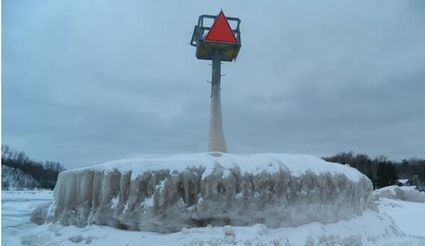 ON JAN. 19, a breakwall is under ice on Lake Superior at Saxon Harbor, as the worst winter on record on the Gogebic Range is only beginning. The frigid weather led to early ice fishing on the lake.

IRONWOOD - The Deep Freeze of last winter will continue to affect Gogebic Range communities for years to come.

The coldest winter on record in Ironwood drove the frost deep and ruptured pipes and watermains, creating an estimated $3 million damage in Gogebic County.

Ironwood pegged damages from the coldest winter in the past 110 years at $1.7 million.

Infrastructure repairs will continue throughout 2015.

It was so cold during the winter that although there was ample snow, windchill readings as low as minus 40 for several days kept outdoor enthusiasts, like snowmobilers and skiers, indoors.

School districts were forced to add more classroom days to the calendar in the spring to make up for snow days, as on at least 10 mornings it was just to cold or snowy to send the buses out.

The second consecutive severe winter took a heavy toll on the deer herd before the snowfall ended late in spring.

Propane fuel users suffered with costs that tripled from shortages and Gov. Scott Walker addressed those rising costs during a January appearance before the Hurley and Ironwood Chambers of Commerce.

The severe winter wasn't all bad, however. In February, blue ice formed at Little Girl's Point on Lake Superior and hundreds of visitors bundled up and trekked out for miles. Thousands also visited the Lake Superior Ice Caves near Bayfield, Wis.

The woes from the winter didn't end when more than 200 inches of snow finally melted. Luckily, spring flooding damage wasn't heavy on the Gogebic Range.

As 2014 ended, the Ironwood City Commission authorized a request for qualifications for engineering services to cover a Big Freeze project grant. Project funding of about $530,000 is being sought for Ironwood through a state Urgent Need Fund to cover added costs created when frost that drove eight feet deep caused infrastructure repairs far beyond budgeted expenses.

Shortly before the year ended, Gov. Rick Snyder announced emergency Deep Freeze funds for Ironwood, Bessemer and Wakefield. Ironwood will receive $100,000, Bessemer $92,251 and Wakefield $83,102 to partly cover costs of the severe winter of 2013-14.

The communities are also seeking funding from other sources.

"Communities on both sides of the bridge are still recovering from last spring's flooding and last winter's brutally cold temperatures and deep frost levels," Snyder said.

Snyder first declared a state of emergency for Upper Peninsula flooding on April 17, then on May 7 it was amended to include Gogebic County and other counties for the severe winter.

In July, Michigan was notified by the Federal Emergency Management Agency that northern Michigan communities affected by the Deep Freeze didn't meet the required federal threshold for a presidential disaster declaration, but in October the Michigan Strategic Fund approved more than $7.6 million in aid for winter damages.

While Gogebic Range residents were still reeling from the severe winter and looking forward to weather relief in the spring, it didn't turn out that way.

A spring and summer of very wet and cold weather continued to set records. The National Weather Service office in Marquette said the period from Jan. 1 through Nov. 30, 2014, was the second coldest 11-month span since 1901.

November added icing on the cake with the most snowfall in Ironwood in the past 110 years and the second coldest temperatures. Lake Superior-effect snow piled up to a whopping 89.2 inches for the month, while the average temperature of 21.2 was 8.6 degrees below normal.

There were four consecutive days of 10 inches or more snowfall.

Fortunately for the area deer herd, much of the on-the-ground total of 40 inches of snow melted on a very warm day during deer season.