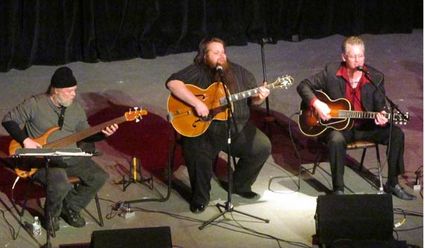 STEVE JONES and the Garden City Hot Club perform during a concert at the Historic Ironwood Theatre on Saturday night. Band members include Scott McIntosh, Bob Hiltunen and Steve Jones.

IRONWOOD – Local residents spent the evening listening to various styles of jazz and blues during a concert with Steve Jones and the Garden City Hot Club at the Historic Ironwood Theatre on Saturday night.

The bands three original members -- Steve Jones, Bob Hiltunen and Scott McIntosh -- all hail from the Upper Peninsula, and were joined by guest musician John Peiffer. Peiffer plays the French horn in the orchestra at the National Kennedy Center in Washington, D.C.

Throughout the evening, the band played different pieces, but many had the common theme of "gypsy swing." "Gypsy swing" was made popular by musician Django Reinhardt, and Garden City Hot Club performed many of his pieces.

"He was a legendary guitarist," Jones said.

In addition to Reinhardt's influences, Jones and the band also played original pieces, coming from a variety of influences as well. One song, performed in a similar way to music in Mexico, was inspired, but a not-so-southern town.

"Bob and I played a south-of-the-border type place in Hancock one night, and it just came to us," Jones said of the song.

Some of the pieces were strictly instrumental, while others featured Jones on lead vocals and Hiltunen singing harmony. Peiffer also joined in the singing on a few songs, creating a three-part harmony, and also performed using his harmonica.

The audience was often engaged during the songs, applauding after solo performances and laughing at jokes Jones and Hiltunen mixed into the music.

As for future events at the theater, people are invited to a free concert after SISU Ski Fest on Saturday, Jan. 10 at 6 p.m., featuring Conga Se Menne.

The month of January ends with a performance by Warren Nelson, formerly of Big Top Chautauqua on Jan. 31 at 7:30 p.m.

For more information about Steve Jones and the Garden City Hot Club, visit gardencityhotclub.com. To learn more about future events at HIT, or to purchase tickets, call 906-932-0618 or visit ironwoodtheatre.net.