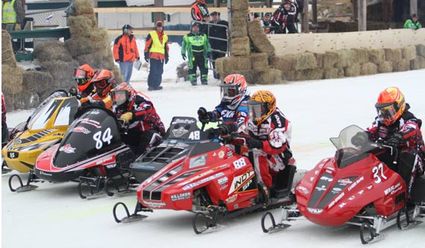 IRONWOOD – About 1,000 people braved chilly weather to witness the fifth annual Ironwood Snowmobile Olympus at the Gogebic County Fairgrounds on Saturday, but poor visibility caused Sunday's races to be canceled.

The event is hosted by the Ironwood Snowmobile Olympus Group, comprised of snowmobile enthusiasts from around the area.

The group works for six months to prepare for the annual weekend event.

"The track has two months in it, between cleaning snow, prepping the base and those kinds of things," Richter said. "The actual event, we work on it about six months out of the year."

According to group member Brett Richter, the races started in Ironwood in 1968, but fell by the wayside after a number of years, before starting up again in 2010.

This year, the group partnered with the United States Snowmobile Association, which brought in late model snowmobiles for vintage classes.

More than 400 entries braved the icy, fast track, racing at speeds more than 100 miles per hour on Saturday. Entries came from all over the U.S. and Canada, hoping to grab the checkered flag.

"We have four provinces in Canada and 15 states represented," Richter said. "We even have one team that traveled 27 hours from Alberta, Canada, to race here this weekend."

When not watching racing, spectators were able to visit the pits and talk to drivers

"The people who finally come to see this for the first time are like, 'Wow. I had no idea it was like that,'" Richter said. "Just try it. Come once. It's $10 for the day to get in and see it. And once you see guys going 100 mph on ice, or see these machines, it's just cool as heck."

The dates for next year's event will be selected in April.