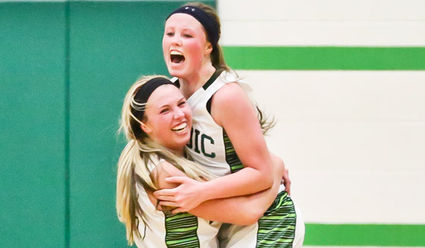 IRONWOOD - Gogebic vs. Finlandia. Sam Ofstad vs. Marissa Burke. Neither matchup could have been more even.

Gogebic Community College's Sam Ofstad nailed a 3-pointer on top with two seconds left to give the Lady Samsons a 69-66 victory over Finlandia Wednesday night.

The triple gave Ofstad a game-high 30 points, three more than the 27 scored by Burke of Watersmeet.

"I didn't know how many seconds were left, so when I got the ball, I shot it right away," Ofstad said. "Luckily it went in. This was a very good win for us. It was a very good team we played against and it's going to help us get better."

Finlandia never led until midway through the second half. Seven more lead changes - and a thrilling finish - followed.

"It wasn't the original play, but with the night that she had and the season that she's had, I guess when all else fails, plan B is just get it in her hands," Gogebic coach Mark Movrich said. "I'd say 80 percent of the time she's going to make something good happen."

"It was to come off of a screen-and-roll with her and if they didn't hedge it hard, we were going to try to get it to Brittni (Kisul) on the roll," Movrich said. "But they defended it well. Luckily our girls kept their composure and we made a play."

Finlandia coach Terry Klemett, who played for the Samsons in the mid-90s, was happy with his team's defense on the initial play.

"She just made a hell of a shot," he said. "She's a good player. There's nothing you can really do about it. She had a great game. She was feeling it. I just think there were plays before that play that allowed that possession to happen. That's what we didn't capitalize on. Sam single-handily won that game."

Vinkemeier's free throws may be forgotten in the excitement of Ofstad's game-winner, but the Lady Samsons would have faced a much tougher scenario had she missed even one.

"Those are huge free throws because if she misses just one of them, now we're in a situation where we probably have to foul," Movrich said. "How does that play out? They make free throws and now we're down three? It's like you're extending the game, but are you ever catching up?"

And Ofstad's 3 is probably coming a lot sooner than with two seconds left.

"Now we're probably forcing a 3," Movrich said. "There's nothing wrong with it going to overtime. We weren't losing it in regulation. We were I think a little more relaxed, even before the shot took place, nobody panicked with the ball. Where if we're down three, somebody's probably panicking with the ball or forcing a shot."

Just like the plan wasn't for Ofstad to shoot a 3 at the end, the play Vinekmeier was fouled on wasn't drawn up for her.

"There actually was supposed to be a down screen for Sam," Movrich said. "Sarah (Trudgeon), I don't know just caught up in the moment and swung it. Darian took it upon herself to get by her girl, which she did. She got to the foul line and sank both of them."

Klemett said the Lady Lions defended that possession very well before the foul was called with five seconds on the shot clock.

"That was the game changer," he said.

The Lady Samsons are in the midst of a great season with their record improving to 17-4. But games competitive for all 40 minutes have been tough to come by. It was also a big game for the local girls who have played against Finlandia's local girls.

This is probably GCC's signature win.

"We needed a game like this," Movrich said. "We've had a lot of close games against close teams; we've had a bunch of moral victories against tough teams. We needed an actual victory against a good team."

"I tell you what, I just can't say enough good things about Sam Ofstad, the complete game she had tonight," Movrich said.

Burke, a preseason All-American, was pretty good also. Burke also was a Dream Team player as a senior in 2011 at Watersmeet.

"I think she's become a much more complete player with pretty much unlimited range. She hit some deep, deep 3s," Movrich said. "But what I really, really saw from her tonight was the way she was coaching her teammates on the floor. It was like having another coach on the floor. It was all positive things and what they should be doing."

Gogebic started fast, scoring the first nine points. But things stalled after that. Already shorthanded, Brittni Kisul and Ale Kohegyi picked up their third fouls, depleting them of inside players. But a couple of others were versatile enough to defend inside.

"Finlandia mostly had perimeter players on the floor, too, so we were able to get away with it," Movrich said. "Where we really missed it was Brittni's presence inside."

Finlandia (7-10) then wore Gogebic down in the second half to nearly take the win.

"For our girls to stay in the game and battle back after being up the whole game, I couldn't be prouder of them right now," Movrich said.

"We came out flat for the first 12 minutes of the game," Klemett said. "I told them before we came in, 'You can't go into a game and have that kind of flatness for that long. We're a good team. We bounced back because we have a longer bench."