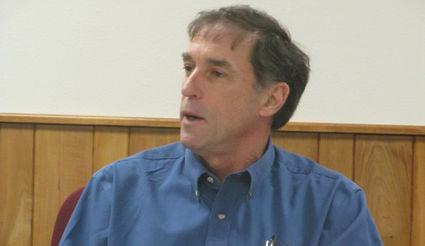 BILL WILLIAMS, president of Gogebic Taconite, speaks to the Iron County Mining Impact Committee during a meeting on Thursday in Hurley about reclamation of a proposed mine site near Upson, Wis.

HURLEY - Gogebic Taconite provided information on its current work for a proposed mine near Upson, Wis., as well as possible reclamation ideas during an Iron County Mining Impact Committee meeting on Thursday night.

G-Tac president Bill Williams and engineer Tim Myers addressed the board and answered questions throughout the meeting.

According to Williams, the company has been monitoring water levels at the mine site, and have been performing numerous office investigations. The investigations including geological and grade models recently updated to reflect glacial till deposits and mine design and planning sequences and scenarios are being generated.

"We want to remind you that the guidelines for the design are based on state law," Williams said. "It is the primary guiding factor, which states that first, wetlands should be avoided, if they can't be, then secondly wetland disruption should be minimized as much as possible, and finally mitigated."

Williams said "most likely not," this winter, but he "won't say never," if an opportunity presents itself.

The plan for the mine site is to have four smaller pits all on the Iron County side, with the process of opening the first pit, and backfilling it with the second pit when it comes time to start.

Part of the proposed reclamation plan is to have a man-made lake on the site after mining is completed. Kolesar asked how big the last pit would be for the Lake.

"We're not sure yet, because water elevation will play a big part," Williams said.

When asked why the plan was changed to four smaller pits, Williams said it would reduce the footprint of the stockpile, and minimize wetland encroachments.

"It's better off in all aspects of complying with the law," Williams said.

Kolesar also asked how much G-Tac would have to pay to purchase one acre of wetlands, if needed Williams said he has heard prices vary between $45,000 to $50,000, and said the Wisconsin Department of Natural Resources has mentioned about selling an acre for about $50,000.

However, with the purchase of one acre, G-Tac would be required to replace the one acre, plus more.

"We would have to replace it with about 1.8 acres," Williams said. "It would cost us about $100,000 to purchase an acre when including the replacement process, so we want to avoid that."

Williams and Myers also sat in on the committee's reclamation discussion. Kolesar said she received ideas from a couple of Iron County residents.

She said one idea supported industry as the plan to help generate more revenue for the county. Mercer resident Tracy Benzel also submitted a plan, and Kolesar was impressed with it.

"Off all the reports that have been submitted, this one had the most information in it," Kolesar said. " ... It just has a lot of information in here, and I really appreciate it."

Questions were raised about accessing an easement to the county-owned property within the site. Surrounding property is owned by RGGS Land and Mineral, Ltd., of Houston. G-Tac has an easement, but Iron County would have to negotiate with RGGS to gain their own easement.

"Otherwise it would very difficult for us to access the property," Kolesar said.

Committee member Bob Walesewicz presented a question regarding gravel uses from the left over product from the mining process.

Walesewicz asked if there was good rock available in the product and could gravel be accesses during the mining process.

"We have a fairly large need for gravel now, and having such a major land disturbance, we want to maximize the product as much as we can," Walesewicz said.

Williams said blasting would take place on the site, with size distribution varying, but said it "can be crushed."

The question then became would people accessing the gravel need special training? A retired Mining Safety and Health Administration (MSHA) employee was at the meeting and said the certification would be needed for those employees.

Questions were also raised about whether or not gravel crushing could also take place during the mining process.

The MSHA employee said the crushing would have to be on an inactive part of the mine, and gravel crushers are considered to be miners, but in a different sense from those working within the active mine in Upson, according to MSHA standards.

The gravel crushers would be considered contractors, and MSHA has separate rules for that.

G-Tac was asked if something could be set up through the mine design process to allow for people to access the gravel in "lay-down" areas.

Williams and Myers said it could be done.

Throughout the reclamation discussions, questions regarding specific projects were hard to answer, because the DNR will ultimately decide what can and can't happen on the site.

"We can ask you anything, you can tell us what you are capable of doing," committee member Larry Youngs said. "But the DNR is going to tell us what to do."

Williams advised the committee that the reclamation plan submitted to the DNR is not necessarily the "final" plan.

"You also have the ability to change the plan through the years," Williams said. If you submit a plan, and this is your reclamation, and it gets approved, but you say, 'We would like to change that reclamation,' or do something else, it can be an on-going evolution until the day that it is reclaimed."

Throughout the process, Kolesar and the committee have discussed "being flexible" with project ideas.

"Hopefully, this will be a team effort between us, G-Tac and the DNR to come up with something that works for everyone," Kolesar said. " ... When talking to Larry Lynch (of the DNR), he said to avoid specifics, so the next generation can choose when mining is gone."