Owners Jim, Mary Beth and Anthony Eismueller have owned the lodge for about three years and the lodge is named for Jim and Anthony. The couple's son.

This is the sixth year the event has taken place.

"One of the things that I find with the tournament, is just that the local community really supports and helps this event," Mary Beth said.

The cash prizes for the weekend event totaled $2,500, but does not include the prizes given away.

There were also other items being raffled off, including a three-night stay at Caesars Entertainment in Las Vegas, a half-day snowmobile rental from the Lake Gogebic Sports Center and two roundtrip tickets from Ironwood to Chicago from Air Choice One in Ironwood.

"I think that's a lot of the spirit of what we're trying to do with everything that we're doing," Mary Beth said. "Everybody gave us great prizes so we can give away some really good things."

The lodge also created special sweatshirts for the event listing businesses around the lake on the back.

The support from many businesses throughout the Gogebic Range is what keeps the tournament an annual event, according to Mary Beth.

"One of the things that we're trying to do is we're really trying to build a strong community partnership," Mary Beth said.

During Saturday's tournament, the weather couldn't have been better, Jim said, with warmer temperatures throughout the day.

"The fishing has been very good with the warmer temperatures, and it's very nice that the ... weather is working with us," Jim said.

According to Mary Beth, in 2014, the event included "frigid, frigid cold temperatures."

"It's like a 180 from last year," Jim said. "It makes the turnout and everybody a lot happier. ... With temperatures in the 30s, everybody seems to be having fun."

Jim said these fishing tournaments are all about "making memories ... and the camaraderie."

Though there were power outages in the area on Friday night and into Saturday, Jim said that doesn't stop ice-fishing men and women.

"Ice fisherman can always roll with it. They all have their headgear and lights, so it doesn't bother them," he said. 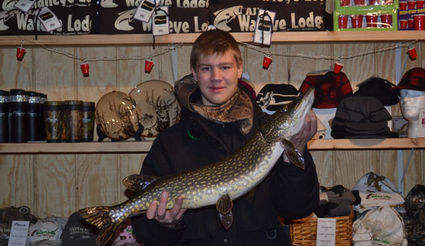 JOHN BERGLUND holds up his 30 inch northern after the sixth annual Lake Gogebic north shore fishing tournament over the weekend. More than 100 participants attended the event.

Because of the power outages, Friday's registration took place by candlelight. Mary Beth said many fisherman took the time to tell stories about last year's event.

" ... When I was listening to these guys talk, I was very happy that we did it because it's really doing something for other people that was really cool," Mary Beth said.

Despite the large amount of locals in the tournament, many out-of-towners also made the trip. Fishers from Michigan, Wisconsin, Minnesota and Illinois attended the event.

"There's probably almost 20 guys from Baraga that come each year" Jim said. "A lot of the same people come. ... These guys are building life-long friends."