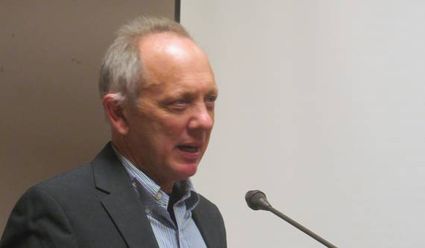 PETER PALM speaks after receiving the Ironwood Chamber of Commerce's "Person of the Year" award during the 20th annual Joint Installation Chamber Banquet at Gogebic Community College in Ironwood on Monday night. The annual event joined the Hurley and Ironwood chambers of commerce to recognize local businesses and individuals.

IRONWOOD - From singing German polkas to Finnish jokes, the night was filled with laughter and recognition during the 20th annual Joint Installation Chamber Banquet Monday night at Gogebic Community College.

Bob Jacquart, CEO of Jacquart Fabric Products and Stormy Kromer, gave an update on the "goings on" at Copper Peak, including funding sources, building plans and future plans of ski jumping events.

"It's fun and exciting, and I think the world will come here for this," he said.

Jacquart praised the chambers for their work, but challenged them to do more.

He asked the audience to imagine a family vacationing in the area and he mentioned a variety of destinations, local businesses and other attractions that they would find appealing.

He also had the audience imagine they were 27-years-old, working for a marketing company, asked to market this area.

"Would you break it up in these little pieces," Jacquart asked, showing the logos for the four area chambers, also including Bessemer and Wakefield. "Or, would you market them all together?"

Since that time, Stormy Kromer has expanded to see a variety of products, not just hats, in a variety of colors and styles.

"If Stormy Kromer fulfills the forecast we have for next year, the company will be 146 times bigger than when we first bought it," Jacquart said.

Throughout his presentation, Jacquart highlighted the importance of seeking help."

"I don't have the answer, but there is enough creativity in all of us to come up with the answer," Jacquart said.

The first award for the evening went to the Highline Corporation, of Hurley, as the "Organization of the Year."

Hurley Chamber member Tim Myers said Highline is an "organization to be proud of," and it helps local residents with disabilities find work.

"I visited the facility, and there are people doing things," Myers said. "Everyone had a purpose."

Donna Reinerio spoke on behalf of the corporation and said "it's a team effort."

Chamber member Bill Stutz presented the Hurley Midget Booster Club with the "Years of Service Recognition" award, and spoke about a "core group of dedicated volunteers," who have helped the organization help the Hurley community for more than 40 years.

"On behalf of all the club members and supporters, we say thank you," Bill Ceccon, club member, said.

When it came to the "Community Service Recognition" award, presenter Bob Zell compared the recipient to some popular figures.

Zell said in the world of boxing there was great figures like Mohammed Ali, and in football Bart Starr, Brett Favre and Aaron Rodgers.

"In the music world, there is Dorothy and the Boys," he said.

Dorothy Walesewicz, her husband Joe and their friend Ron Hocken have volunteered their musical services to events around the area.

"I don't do this for the awards, I do it because I love it," Dorothy Walesewicz said. "I just want to thank you all."

Before leaving the podium, Dorothy Walesewicz led the crowd in a rendition of "Roll Out the Barrel," a popular song for the band.

The next award came as a surprise the recipient. Kelli Stutz, of Gile, Wis., was named "Female Volunteer of the Year." Her husband, chamber member Bill Stutz had not told her about her award.

"You are in so much trouble," she said to him before going to the podium.

"Thank you," Kelli Stutz said. "Everyone is volunteer of the year as far as I'm concerned."

The "Male Volunteer of the Year," award went to Larry Youngs, of Hurley. Bill Stutz said Youngs was an "all around good guy to know."

Youngs said he was surprised to receive the award because "I don't do anything all day but ride around and gossip," to which the audience laughed.

The "Citizen of the Year" award went to chamber member Bob Walesewicz, who spoke about why he chose to come back to this area.

"This is an extremely great area, and I want to help push it forward and give back," Bob Walesewicz said. "I humbly accept this award, and I thank my family for all of their support."

Bob Walesewicz also presented the "Business of the Year" award to Northwoods Manufacturing, a student-ran business within the Hurley K-12 School District.

"I love to break down business models, and this model is crazy," Bob Walesewicz said. "You have high-tech equipment, well-trained employees and yet, each year (superintendent) Chris Patritto kicks them out."

Instructors Roger Peterson and Jacob Hostettler, along with a few students, accepted the award. Each of the students briefly spoke about the roles they play in the business and what they are currently working on.

"None of this would be possible without community support," Hostettler said.

Chamber member Susan Wolfe presented the final award, the "Community Appreciation" award to Days Inn, of Hurley. The owners, Edmund Gallagher and Vincent Maly were in attendance for the event.

"We love it here. Thank you so much," Gallagher said.

Chamber member John Parker presented the first award, the "Business of the Year," to Uncommon Goods.

The consignment boutique started as a Christmas shop in the front porch of a home in Ironwood. Soon it blossomed into a bigger business in Hurley, before moving into downtown Ironwood.

"Thank you all so much," they said.

Tim Kolesar, of Ironwood, presented the "Gus Swanson Excellence in Education" award to Gogebic Community College, for being a "leader in collaboration and partnerships."

"Thank you so much to the chamber," Lupino said. "We really appreciate it."

Lorenson said, "We are your community college, and let us know how to better serve you."

The "Person of the Year," went to Peter Palm, of Maplewood Steak House in Ironwood, presented by his friend Peter Grewe.

"So honored and thankful," Palm said. "Thank you to my family, because I couldn't do it without them."

Later in the event, Grewe announced the presenter and the recipient for the next award were both absent. Presenter Keith Johnson and "Volunteer of the Year" winner Jerry Synkelma were both at the XGames in Aspen, Colo., cheering on Ironwood resident Kyle Pallin.

To fill in, Will Corcoran both presented and accepted the awards on their behalf.

"I didn't fill out a name tag tonight, because I didn't know who I was going to end up being for this," Corcoran said.

The final award was presented by chamber member Gary Kusz. The award of "Organization of the Year," went to Santa's Headquarters.

"Thank you so much," Mildren said. "We are blessed to live here, blessed to know you all."