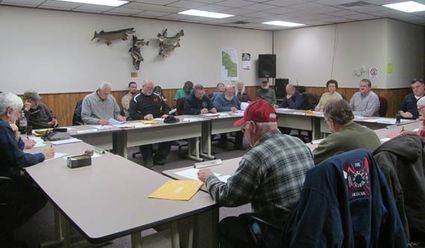 HURLEY - The Iron County Board of Supervisors learned on Tuesday that mining company Gogebic Taconite was unable to make its lease payment for county property for its proposed mine site near Upson.

"(G-Tac) asked if we could just let it go for a year," Pinardi said. "Mike (Saari, county clerk) and I talked the next morning, we contacted our attorney Michael Pope and gave Opal (Roberts, chair of the Iron County Finance Committee) a call, as well. We approached G-Tac with our second option, which was give us $10,000 this year and $10,000 next year. G-Tac emailed their headquarters and it was turned down."

"So, we went to plan B, which was give us $30,000 next January, and extend the lease to a three-year period instead of two. They accepted."

Pinardi said Pope said the extension was fine after reviewing the lease. Bill Williams, president of G-Tac, and Pinardi signed the document.

However, despite it being signed, Pinardi said the county board has to approve the lease, and can still change it. Because the lease was discussed under "Communications," and was not listed on the agenda, Pinardi said the board couldn't vote on it. He asked the members to take the next month to review it. A vote will be taken during the February board meeting as to how the county should proceed.

"As of right now, we are still going to be getting $10,000 a year from G-Tac," Pinardi said. "They claim they spent all this money in a coal mine in Nova Scotia."

Supervisor Vic Ouimette questioned why the board would enter into the same lease again if there were problems with the first one.

Pinardi said the lease is "in limbo," until the vote next month and said at that time, the board can rectify what they consider to be wrong with the agreement and "correct what needs to be corrected."

"We asked Michael Pope, and this is what he recommended," Pinardi said.

During public comment, four county residents questioned the lease, wondering why the county would continue to do business with G-Tac, while another resident spoke in favor of the extension.

Tony Stella told the board it was "a bad lease," and how it was a bargaining chip to bring G-Tac to the table.

Another resident said the lease was Iron County's "one shot," and said the board should demand royalties and payments upfront as a "junior partner" in the project, similar to how G-Tac and other companies make business deals.

Pinardi thanked the residents for their comments and said the matter will be discussed during the February board meeting.

Supervisor Tom Thompson, of Mercer, introduced the new Forestry, Parks and Recreation Department director, Eric Peterson, to the board.

Peterson said he has a "good staff on board" in the department and said he's "looking forward," to his new job.

During the committee reports, Thompson told the board about the total stumpage, or a price on standing timber and the right to harvest it. For 2014, the county finished with $2,558,180 in stumpage, $918,180 more than what the county predicted for the year, and a new record for stumpage for the county.

Board members told Peterson he has "a high bar to meet."

However, Thompson said Peterson was starting off well, taking in stumpage at $133,355 for his first measurement in 2015.

Thompson also presented the 2015 forestry work plan, which was approved by the board.

According to the plan, the department will "generally target areas of poor forest health and low or declining growth."

The department also plans to update Saxon Harbor, including installing sidewalks and four new docks in the north basin and installing new docks and a boat launch on the west side.

At Lake of the Falls, the plan is to build a bathroom and shower facility, and a dump station, as well as work on expanding the pavilion.

On the trails, the plan includes placing new decking on the Arrowhead and Layman Creek bridges and a trail reroute on the west side of Hurley.

Mike Wiggins Jr., chairman of the Bad River Band of Lake Superior Chippewa, spoke to the board, and invited the members to attend a joint impact meeting on Feb. 3 at 6 p.m. at the Bad River Casino in Odanah, Wis. The committee includes representatives from Iron and Ashland counties, and the towns of Morse and Anderson.

Wiggins said he invited the board to talk about "positive economic opportunities that could be standing between us."

Wiggins also apologized to Pinardi for past comments he made against him regarding the mining issue.

According to Wiggins, he would like to see the area move forward, as both Bad River and Iron County "share a home."

He also said each year, the reservation enters an agreement with Ashland County regarding $100,000 received in gaming money. The two entities split the money 60-40 percent, with the county receiving the larger amount. The funding is used for projects beneficial to both parties, and Wiggins said he would like to have Iron County enter the conversation, including helping with snowmobile trails between the two counties, food pantries and other ideas.

"I think so, too, Mike," Pinardi said. "Thank you for your comments."