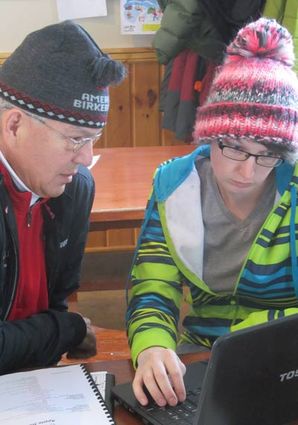 ERNIE ST. Germain, left, one of the founders of the American Birkebeiner ski race in Hayward, Wis., works with Kelsey Roble on timing for the annual YooperBeiner snowshoe race/tour on Monday at Wolverine Ski Trails. The YooperBeiner is Feb. 21 at Wolverine.

IRONWOOD TOWNSHIP - With only a few weeks left to finalize the details, one of the American Birkebeiner founders took time to help with another Beiner-themed event on Monday.

Ernie St. Germain attended a planning meeting for the annual YooperBeiner snowshoe race/tour at Wolverine Ski Trails to help plan to the timing of the event. The YooperBeiner is set for Feb. 21 at Wolverine.

St. Germain is the only skier to race in all 41 of the Birkebeiner races, also called the "Birkie," in Hayward, Wis.

According to St. Germain, Tony Wise started the Birkebeiner after another resident of Hayward, Wis., and of Norwegian descent told Wise to start something with "real skiing," referring to nordic skiing.

"Tony owned Telemark and he promoted tourism in that area," St. Germain said. "Hayward was put on the map by him."

St. Germain participated in the first Birkebeiner after being coaxed into it by a friend.

Before his first race, St. Germain said he was a down-hill skier and "had no idea what nordic skiing was." His first time on cross-country skis was the Saturday before the inaugural race in 1973 at the home of friends Ligman and Edna Williamson.

"Ligman looked at me and said 'My wife won't let me race. You have to represent me,'" St. Germain said. "He told me to be there one week later and they would feed me with pancakes before going to the race."

The first race took place on a lake and traveled to Telemark Lodge in Cable, Wis. St. Germain said he was quite surprised by the distance, and wasn't expecting it to be that far.

"All Ligman said was, 'I'll pick you up at Telemark. All I could think was 'What?'" St. Germain said.

According to St. Germain, the first race consisted of 35 racers, no food or water stations and totaled 48K.

Now, the race boasts more than 10,000 racers each year, from all over the world.

As for his assistance with the YooperBeiner, he is more than happy to help.

"Anything like this, to get people outside is the greatest thing in the world," he said.

According to YooperBeiner public relations representative Deb Leonard, St. Germain helped with timing two years ago for the event.

"He has graciously helped us," Leonard said. "We are very thankful to him for that."

For St. Germain, it's something he's "all for."

The annual event consists of four snowshoe events at Wolverine. The kids race, ages 4 and up, starts at 10 a.m. on Saturday, followed by the 10K and 5K men's and women's races and a 5K and 2.5K tour. The tour is a non-competitive walk/run for people.

The race is a United States Snowshoe Association-sanctioned event and part of the Braveheart Snowshoe Race Series.

According to race director Susan Spaete, the purpose of the event is to promote "being physically fit" in the community.

Spaete said many local residents and organizations and businesses participate in the event, and "wellness teams" can be created, fitting in three different categories based on sizes of the organizations or businesses. Winners in each category can win traveling trophies.

"Last year, we had 87 people participate in the event, and 66 participants were locals," Spaete said. "That support is greatly appreciated."

Participants of any age are encouraged to attend, with the snowshoers as young as 4 and as old as 80.

"Snowshoeing can be done at any age," Spaete said.

Leonard said, "This is a community of outdoor friends from all walks of life. Generations of families participate and it wouldn't be as successful as it is without our dedicated volunteers."

For more information on the YooperBeiner, visit wolverinenordic.com or visit the trails, located at E5445 Sunset Rd., in Ironwood Township. To register for the event, visit signmeup.com.