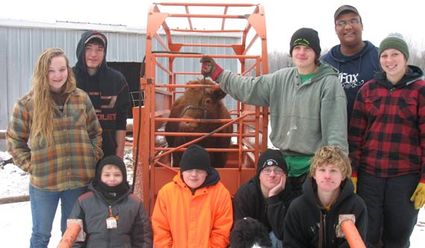 MEMBERS OF the Gogebic County 4-H Market Livestock Group pose for a photo after weighing in eight steers on Jan. 2 in preparation for the group's annual livestock auction during the Gogebic County Fair in August. The group, which started in 1972, is within $50,000 of making $1 million through the auction. Pictured are, first row, from left, Wade Somero, Lyle Somero, Adam Newberry and Mike Newberry; second row, Sarah Rand, D'Kota Engler, Will Newberry (holding his steer Jedi), Tristen Wanden and Nicki Lekies.

IRONWOOD - A million dollars is within reach for some local youth after years of hard work and dedication.

The group, originally called The Hidquarters, started in 1972 after beef breeders and other interested parties started planning to put together a youth steer project for the fair, allowing the youth to show and sell their steers.

One year later, the group met with the Gogebic County Fair Board to discuss adding a steer show and sale for youth during the 1974 fair.

That September, a governing board for the group and event were elected, with Ted Friedman, John Koski, Carl Martinson and John "Gibby" Palojarvi on the board.

"They are the reason we are still doing this," Ashley Hampston, 4-H temp for the Gogebic County Michigan State University-Extension office, said. "They started it and kept it going for many years."

Forty-one years later, the group has progressed, expanding to allow hogs, lambs, broilers and turkeys, in addition to steers.

"The kids are excited about the possibility of hitting the million-dollar mark," Hampston said. "When this first started, nobody believed the auction would ever get this far."

"You don't have to belong to the group to sell, you just have to be a 4-H member," Hampston said.

Even though the auction isn't until summer, the group members are already busy preparing for the auction. On Jan. 2, the group had a weigh-in for the animals and meet every third Monday of every month.

Throughout the year, members go out into the community, to encourage people to attend the auction. Hampston, who was a former member of the group, said that can be challenging.

"My dad always used to say, 'For every 10 people you see, you're only going to get three to come to the auction,'" she said. "To help, we do a lot of community service projects and fundraisers because the state doesn't fund as much any more."

Hampston said the youth do all the work, with guidance from their parents and current group leaders Becky Magley, Karen Kangas, Katina Newberry and Katie Nelson.

"The kids advertise themselves and do all the work to get people to come to the auction," Hampston said. "Our goal is to get the premiums back up to where it used to be and make improvements."

As for the group, it's more than just selling animals, according to Hampston.

"The kids learn a lot of different things," she said. "They learn about marketing, communication skills, public speaking. They do a great job, and they are really excited about how their hard work is paying off."

For more information on the livestock auction, or the Gogebic County 4-H Market Livestock Group, call the MSU-Extension office at 906-663-4045.