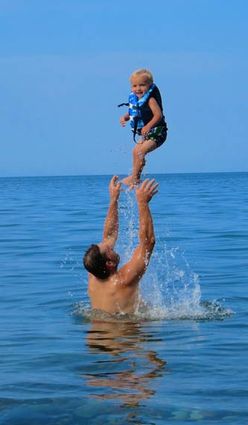 GARY JACKSON, of Ironwood, snapped this photo of Chad Novascone and his son, Jace, both of Bessemer, playing in Lake Superior at Little Girl's Point in August. Jackson submitted the photo to the "Power of the Picture" contest through Lake Superior Magazine last fall and received honorable mention.

IRONWOOD TOWNSHIP - Ironwood resident Gary Jackson takes a lot of photos. So many in fact, he forgets how many he has taken.

The subjects in Jackson's photos vary, among animals, people, structures and nature, and he travels around the area, searching for his next photo.

One summer day in 2014, Jackson was walking along the beach at Little Girl's Point in Ironwood, when he came across his niece and her family playing in the water. He thought of the moment as a photo opportunity.

"I was just walking along the beach, and I saw them, so I decided to take a picture," Jackson said. "It was luck and it turned out really nice."

Later that day, Jackson submitted it to the Daily Globe and the photo was printed on the front page on Aug. 12.

Later, he kind of forgot about it, and it was until fall 2014 that Jackson thought about it again. A friend told him to enter his photo in the annual "Power of Pictures" contest through Lake Superior Magazine.

"I submitted it, and didn't think anything about it," Jackson said. "I actually forgot about it, until I received a phone call from the magazine."

Nearly 1,400 images were submitted to the competition and Jackson's photo, which he called "Leap of Faith," was one of 32 images selected during the 20th annual contest.

All of the images are featured in the February-March issue of the magazine, and also featured online at LakeSuperior.com.

The magazine sent him a copy of the edition, plus a certificate honoring his achievement. Jackson said that while flipping through the magazine, and seeing the other photo submissions, he got some ideas.

Jackson said his "favorite place" is Lake Superior, no matter the season, and loves taking photos any chance he can get.

"I was there all day (Wednesday) in Washburn," he said. "I took photos of the blue ice and the formations. It was so beautiful. ... (Taking photos) is just a lot of fun. It's challenging, but it gives you an outlook to expand your horizons on taking pictures."

As for future photo contests, Jackson is already thinking about it.

"Oh yes, I plan on entering again," he said. "I've got so many photos. I never had thought about entering before, but I will think about it now."