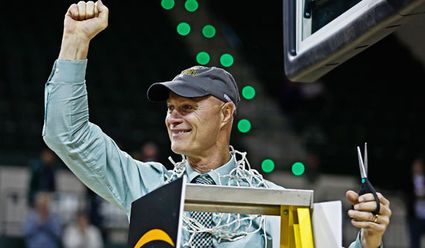 GREEN BAY, Wis. - Like many basketball fans, this is Bessemer native Kevin Borseth's favorite time of the year. That's because the NCAA Basketball Tournaments are getting underway.

But Borseth doesn't just watch the games. He is lucky enough, and good enough, to participate in them as the head coach of University of Wisconsin-Green Bay's women's basketball team.

After posting a 27-4 overall record and winning its 17th-consecutive Horizon League regular season title, this past Sunday the Phoenix won its 13th tournament title and a return trip to the NCAA Tournament.

It will be UW-Green Bay's fourth appearance in the Big Dance in the past five seasons and 15th invitation to the NCAA Tournament all-time. That's not bad for a university that is a Division I school but is also considered a mid-major.

"As a mid-major, getting into the NCAA Tournament is our measuring stick of success," Borseth said. "But we've been so consistently good year in and year out that the expectations keep getting higher. I think it's still a thrill to have the opportunity to compete in this tournament, but the expectation of some people is to get to the Sweet 16. We've been there and done that, but that's a pretty tall order. You're competing against some of the top-rated programs in the country that are very good. You need a really good team that gets hot and you need to be lucky."

But Borseth knows his team has game, too. They've beaten Marquette, Wisconsin (twice) and Purdue this season. In a Thanksgiving tournament in Florida, the Phoenix defeated Georgia Tech and Arizona State, which has been ranked eighth in the country.

"We were tied at 26-26 and then they took right off (an 89-53 loss)," Borseth said. "They were so athletic and so explosive, but it was great for our kids to play them. It was still a big thrill to get the opportunity to compete at that level."

Before Monday's NCAA Women's Selection Special, Borseth said he has been hearing from basketball prognosticators that the Phoenix would be seeded eighth or ninth in its bracket. That's not what he wanted to hear.

"I'd rather be seeded seventh or tenth, not eighth or ninth," Borseth said. "If you're an eight or nine, you wind up playing somebody like Connecticut in your second game and nobody wants that."

But that's exactly what Green Bay got as the NCAA seeded the Phoenix ninth and will play an undefeated Princeton team, which is 30-0. But it will be an intriguing match-up of the top mid-major teams and the game is slated to be broadcast by ESPN2 on Saturday at 10 a.m. from College Park, Md.

Princeton is the only women's Division I women's basketball team to still be unbeaten and their eighth-seed is the highest in Ivy League history.

But even the NCAA women's basketball committee had trouble finding the right seed for Princeton, because they didn't have any wins over Top 25 teams and their strength of schedule wasn't very strong.

To reach the second round, the Phoenix would have to get past Princeton and then likely face highly-ranked Maryland on its court on Monday. The Terrapins dominated the Big Ten with an 18-0 record in its first year in the conference and then won the league tournament.

But Borseth told the Green Bay Press Gazette, he was just happy to make another appearance in the tournament.

"It's tournament time so you get the best teams in the country playing and we're one of those teams right now and we're just very happy to be in that mix," Borseth sad.

What may be even more impressive is that the Phoenix have just finished its 16th consecutive 20-plus win season in addition to its 38th straight winning season.

"That never gets old," Borseth said. "You ride the wave as long as you can. I think our success is a credit to our seniors. They show the younger kids the way we do things and the effort required in school, on the court and in the community. They carry on the tradition. And we have a lot of local kids - kids that are from about one and one-half hours away and then we reach out to other kids. We have two Canadians that are starters.

"We have kids that are highly-skilled, highly motivated and highly trained who are good people with solid values and good heads on their shoulders."

What Borseth didn't mention was that as a coach he has always been known as a very good motivator who players like to play for.

Borseth attended Gogebic Community College and played on the Samson basketball team. He was also one of earliest head coaches in the Lady Samson program. He has said he considers Gogebic and its athletic programs to be one of the "best, under-rated assets" in this area.

In 2007, Borseth made one of the toughest decisions of his life when he up-rooted his family to take his "dream job" at the University of Michigan.

The women's basketball program at Michigan had been in the doldrums for years and although it took a great amount of work, Borseth compiled an 87-73 record in five seasons and began making postseason berths. It seemed as if he could finally start enjoying the fruits of his labor.

And yet, when the UW-Green Bay job opened up again, he jumped at the chance to go back.

Many people (including some at UW-Green Bay) were shocked at his decision, but Borseth said basketball had become nearly a 24-hour, highly pressurized job where he wasn't getting the chance to watch his five children grow up.

In his second go-around at Green Bay, Borseth has found you can go home again-and be happy.

"The quality of life is paramount now," Borseth said. "People are always trying to get a little more, to take that big step. But when you get there, it's different than you thought. I like the people in Green Bay. They're good people. It's a good area and we mix in well.

"And it's a four-hour ride to get back home instead of a 10-hour ride. Especially if I want to see my parents. That stuff is real important to me now."