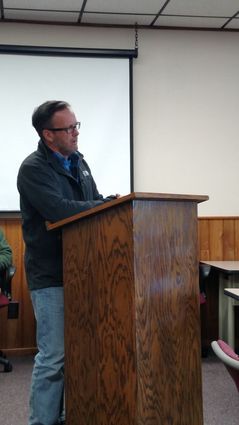 DAVE KRETZSCHMAR, an Iron County farmer who is in the process of becoming a Concentrated Animal Feeding Operation, addresses the Iron County Comprehensive Planning/Land and Zoning Committee during a public hearing Tuesday regarding a potential temporary moratorium on CAFOs.

HURLEY- The Iron County Comprehensive Planning/Land and Zoning Committee voted to recommend that the Iron County Board of Supervisors approve a temporary moratorium on the creation or development of any Concentrated Animal Feeding Operations in the county following a public hearing on the issue Tuesday.

The recommended moratorium would be a 12-month moratorium - with the option to extend it another 12 months if needed - Bergman explained, while the county decided how to regulate the operations as part of its review of its comprehensive plan.

The review of the plan is expected to occur in August, Bergman said.

The moratorium would take effect immediately upon approval by the Board of Supervisors, according to Bergman, unless the board decided to make changes to its language.

Prior to the vote to recommend the moratorium, the committee heard from several residents who generally spoke in favor of the measure.

Among the residents who spoke was Dave Kretzschmar, of Kretzschmar Holsteins Farm. Kretzschmar told the board he was actually in the process of becoming a CAFO as a dairy farmer.

"We're really regulated at this point, even though we are not a CAFO, but we're close. And we're going through the process, quite honestly," said Kretzschmar.

Kretzschmar said he has already reached the point in the CAFO process with the Wisconsin Department of Natural Resources that he wouldn't be impacted by a county moratorium.

"I compliment you as a county ... doing something so we have something countywide, so we can put in place procedures," he said.

Kretzschmar said that with the amount of land he owns or leases in the county - specifically near Saxon and Gurney - it would be impossible for another operation to move into the county and have enough room to establish a CAFO.

"There's not going to be a another CAFO in Iron County ... it's impossible," Kretzschmar told the committee. "(There isn't) enough land. You've got the biggest barrier, impediment in Iron County there is. It's called woods. There is too much forest."

Later in the meeting, Kretzschmar said that approximately 1 to 1.5 acres of tillable land is needed per cow, meaning that at least 1,050 tillable acres would be needed for the 700 cows needed to roughly qualify as a CAFO.

Kretzschmar was noncommittal over the benefit of the moratorium although he praised the county for actually doing something.

"Whatever you do, I think you are doing the right thing because you are going to have a structure to it and you're going to get some ideas," Kretzschmar said as he addressed the board.

After the meeting he told the Daily Globe that he did think the moratorium was an overreach and was unnecessary given the limited land available for another CAFO.

Both Bergman and members of the committee stated they hadn't been approached by other outside companies looking to have a CAFO in the county.

Many of the concerns expressed by residents regarding the CAFOs stem from the disposal of the manure produced by the animals and whether it will impact neighboring residents or contaminate area water sources via surface runoff.

Kretzschmar said that the issue of manure disposal basically came down to common sense and steps could be taken to ensure that the manure didn't enter the water system.

"Go to a flat field, work it in where it's not going to run off," Kretzschmar said. "Now, it's going to go somewhere if you put it on a hill in winter and it rains, you know."

Kretzschmar said that the neighboring counties of Douglas, Bayfield and Ashland, where the issue has also arisen, have considerably more farmland than Iron County and were in different situations.

7,500 acres of the county was zoned as agricultural land in 2005 when the last review of the comprehensive plan was completed, Bergman said.

In February, the Bayfield County Board passed a one-year moratorium on CAFOs after an Iowa developer planned on building a 25,000-animal hog farm in the county.