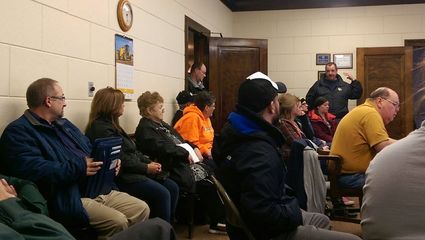 BESSEMER - The main topic of contention at Monday's city council meeting surrounded the laws on the use and growing of medical marijuana.

Bethany Hellen, who owns a dance studio in Bessemer, along with several parents of dance students, attended Monday's meeting to voice their concern about the medical marijuana caregiver who resides above her studio.

The biggest complaint was the smell coming from the building, both into the studio and out on the street.

"Our children can walk down the street and smell the marijuana," said one concerned parent.

"I am an advocate of medical marijuana, there's a lot of great uses for it," said one parent. "However, there's an appropriate time and place. ... There should be some sort of provision in the city council where there is rules about growing and smelling it in business districts and that close to schools."

She said her child has even asked what the smell is.

"As far as this situation goes ... so far they have produced all the legal papers that (show) they are abiding state law," said Gogebic County Sheriff Pete Matonich. "... Our hands are tied as law enforcement regarding those tenants of that apartment. It would be a tenant-landlord issue."

Parents also voiced concerns about how close the marijuana is grown to the schools, especially Washington Elementary.

"I don't believe there is a state law regarding where you grow the marijuana," said council member Linda Nelson. "I think you can grow it right next to the school."

Growing is allowed, but there cannot be a dispensary next to a school, Matonich said.

"What would you expect us to do as a city?" Mayor Butch Semmerling asked those in attendance.

"I would just expect that there would be some sort of ordinance that you can apply," another parent responded.

Matonich said the only ordinance that could be applied is one for noxious fumes, which he said is antiquated and could easily be challenged. He also said an officer would have to vouch for the smells in court and then the citation would be handed over to the city attorney for possible prosecution.

"I want to make sure that we as law enforcement in this community, do everything we can legally to respond to the complaints from the citizens," Matonich said. He said this it what he has authorized Detective/Sgt. Jorge Cruz to do.

"In my opinion, for the most recent time, (the smell) hasn't been at the point that I felt comfortable writing a citation yet," Cruz said.

In terms of it being close to a school and the laws for drug-free school zones, he said "That's where it gets messy."

"If they did something illegal, then they'd be in violation of the drug-free school zone," Matonich added.

One parent asked if there is a way of knowing if they are actually patients who purchase the marijuana.

"How do you keep track of that?" another parent asked.

"It's very difficult," Cruz said. "Obviously with HIPPA and that laws like that, there's things that we can't even find out as law enforcement until there is a potential violation of criminal law."

"Unfortunately our hands are so tied with the laws that are out there, and so is the legal system. There's not a whole lot we can do," Nelson said.

Bessemer Chamber of Commerce President, Kathy Whitburn, was concerned about losing the studio as a business, as well as about drawing future businesses in. Others expressed that concern as well.

"It's disappointing that we have a situation like this, as we are trying hard to grow and develop business in our downtown community," Whitburn said. "... we have to try to do whatever we can to promote new businesses coming in. That will be very challenging if we continue to have situations like this permeating through our downtown community."

Parents also complained about surveillance cameras at the property and the legality of them. Sheriff Matonich said he'd have to research the legality of it before he could give a definitive answer about if the camera was allowed.

The next city council meeting was also moved to Thursday, April 23, at 5 p.m., at the request of Nelson. She said she would be out of town on April 20, but would really like to be a part of the budget hearing, scheduled for the same night.

The council approved the request to move both the meeting and budget hearing to April 23.

-heard about what the possible costs of creating a city newsletter could be from Whitburn. "It's a great way to wrap up some loose ends and get people in the know," she said. Whitburn suggested possibly sending two a year, one in the spring and one in the fall.

-approved a Fourth of July request from Nelson and the Fourth of July committee. "It's basically the same things we always ask for," Nelson said. She also said the committee should finalize the schedule of events by Wednesday or so.