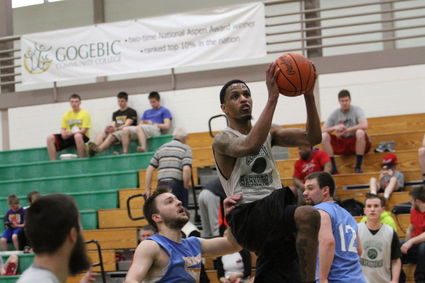 Samson coach Dennis Mackey said there are not a lot of 5-man or 5-women team tournaments around anymore.

"We had a good turnout of 30 teams and there was some good basketball played," Mackey said. "The tournament was real successful. It's grown and we get a lot of the same faces, plus we get new ones each year. People look forward to it. Some of the guys and gals plan their vacation around it. The tournament is also a community service in that it brings in a lot of people and there's a lot of spin off for local businesses. It's a lot of work, but it's a lot of fun, too."

John Duke was a very good player for Gogebic for two years and he played on the Gogebic Ducks team that won in the Men's Division IIA. Duke's team consisted of eight other GCC players who won the Region 13 college basketball tournament two seasons ago.

"I come back because when I was here GCC was like a family to me and I want to rekindle the relationships I have with my former teammates and friends," Duke said. "The best decision I ever made was to come here. We'll keep coming back every year."

Ben Monroe, formerly of Ironwood, was in the Air Force for years and went to college in North Dakota, but returned home to play for the Mighty Ducks.

"This is a great environment and a lot of friends come back from everywhere," Monroe said. "It's kind of like a homecoming or a reunion. Coach Mackey does an excellent job putting it all together."

The weekend is a double fundraiser with the basketball tournament and a fundraiser Saturday night at the Iron Nugget in Hurley.

"All the funds go for scholarships for the GCC men's and women's basketball players," Mackey said.

Gogebic also runs other fundraisers during the year to raise money for scholarships. There is GCC's golf tournament in the summer and the Samson basketball leagues and summer basketball camp, which attracts 130-150 campers.

Lady Samson basketball coach Mark Movrich and Mackey both said the Spring Thaw Tournament can serve another purpose and that is in the recruiting area.

Brittni Kisul, Korrie Trier and Sarah Trudgeon all played on the 2014-15 Lady Samson team and were looking to get a team together for the tournament. Movrich asked if seven potential recruits for next year could play on their team and they agreed. Movrich said there are definite benefits to doing it this way.

"Some are going to go to GCC already and the ones who may play get to meet the girls they could be playing with," Movrich said.

Trier said it helps the recruits to see the style of basketball the Lady Samsons play, which fast-paced, intense and aggressive.

"It's kind of like the first day of practice," Trudgeon said. "It's a relaxed atmosphere and everybody just wants to have fun."

Mackey said the Samsons usually bring in some "prospects" to see if they can take the next step on the basketball ladder.

"You want to see if the high-schooler can compete with the college players," Mackey said.

Mackey said a player in the tournament may catch a coach's eye and eventually become a player for GCC. Mackey said Jonathon Billingslea was one such player and there have been others.

Billingslea returned to the to the Lindquist Center and the Spring Thaw this year, but this time it was for the Mighty Ducks.

Success continues to breed success at the Spring Thaw Classic.